U.S. Army to allow women to wear ponytails with all uniforms

Women in the U.S. Army will be allowed to wear ponytails -- like that of U.S. Army Sgt. Janean Sanders, pictured letting a group of Afghan girls in Kandahar play with her hair -- with uniforms other than those for exercise or combat. Photo by Sgt. Canaan Radcliffe/DVIDS

Women in the U.S. Army will be allowed to wear ponytails, as opposed to a bun, as worn by Maj. Gen. Laura Yeager, with uniforms other than those for exercise or combat. Photo courtesy of California State University Long Beach

In a Twitter question-and-answer session on Thursday, Grinston said that the wearing of ponytails, currently restricted to physical training exercises and allowed while wearing the Army Combat Uniform, will be extended to Army service and dress uniforms.

He did not announce an official date for the change in policy, which is part of an all-branches push to re-evaluate practices which could put women and Black service members at a disadvantage.

The exact wording of the order is still under consideration, he added.

"Working out the details, but 1-2 ponytails in all uniforms, down to the shoulder blade," Grinston wrote, adding that input from soldiers led officials to reconsider appropriate hair styles.

How about I save you the trouble?

The long ponytail was originally voted against. But after hearing from our Soldiers, the panel asked if they could reconsider their decision.

The Air Force changed its rules in February, allowing women to wear their hair in up to two braids or a single ponytail.

The rule requires the bulk of hair to not exceed the width of the head and length to not extend below a horizontal line running between the top of each sleeve inseam at the under arm through the shoulder blades.

In addition, women's bangs may now touch their eyebrows, but not cover their eyes.

A similar rule is expected from the Army.

"This is one way we are working to improve the lives of our soldiers, by putting people first, understanding their concerns, taking action when necessary and maintaining their razor-sharp edge of readiness," Lt. Gen. Gary Brito, deputy chief of staff for Army Personnel, said in January.

Defense News // 10 hours ago
V-22 Osprey conducts first landing on deck of a ship
April 16 (UPI) -- The U.S. Navy announced it landed an Osprey V-22 aircraft for the first time on a flight deck aboard a Navy hospital ship, the USNS Mercy.

Defense News // 11 hours ago
Senate bill would restrict F-35 sales to United Arab Emirates
April 16 (UPI) -- The Biden administration is seeing pushback from Senate Democrats after going ahead with a Trump-era deal to sell F-35 fighter aircraft to the United Arab Emirates. 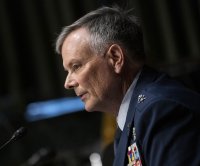 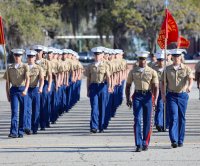