Personnel of VMFA-323, known as the "Death Rattlers," returned to Marine Corps Air Station Miramar, Calif., after a 10-month deployment with Carrier Air Wing 17 aboard the Navy aircraft carrier USS Nimitz in the Indo-Pacific area of operations.

The historic nature of the actions of VMFA-323, formed in 1944 and with a long history of working with the Navy, and the Marines' oldest planes in service was noted in a teleconference featuring Rear Adm. James Kirk, commander of Carrier Strike Group 11.

"Obviously with older aircraft, they do have challenges, but they rose to those challenges," Kirk said. "Those maintainers did a great job, and those Marine pilots executed those missions ... That Marine squadron met the mark, hit the mission."

Among the missions Kirk noted were "Operation Inherent Resolve, Operation Octave Quartz, or Operation Resolute Support, or the just-presence missions we did or the operations we did during dual-carrier ops in the South China Sea [in 2020] with the Ronald Reagan Strike Group of the TR [Theodore Roosevelt] Strike Group."

With the final fly-off of the F/A-18 planes, first used by the Marines in 1983, the squadron is planned as the last of the Corps' F/A-18 squadrons will upgrade to the F-35B.

The F-35B variant of the aircraft, flown by the Marine Corps and a handful of allied air forces, is capable of short-takeoffs and vertical landings.

The F-35C -- which will be flown by other Marine squadrons -- features larger wings with foldable wingtips, stronger landing gear for the stresses of carrier arrested landings and a stronger tailhook for use with carrier arrestor cables.

Both variants of the F-35 also significantly outpace the legacy F/A-18 planes, with higher speeds, increased lethality and heightened use of computers.

The U.S. Navy is also divesting itself of F/A-18 planes as fast as procurement, and deliveries from manufacturer Lockheed Martin, permit.

Defense News // 3 hours ago
USS Laboon conducts Romania port visit during Black Sea deployment
June 22 (UPI) -- The Arleigh Burke-class guided-missile destroyer USS Laboon stopped in Romania over the weekend as part of its current deployment in the Black Sea, which includes the Sea Shield 2021 exercise, the Navy said this week. 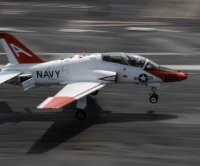 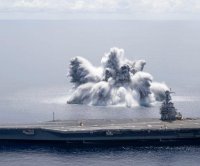