As a decision on full-rate production of the F-35 fighter plane near, critical tests have not been performed and the ballooning cost of the program has been criticized. Photo courtesy of Lockheed Martin

The F-35 program, building what is regarded as the world's most advanced fighter plane, has cost nearly $1.8 trillion in development costs in the past 20 years.

Only about 500 have been produced, although the Pentagon envisioned purchasing thousands to replace aging fighter planes like the F-16.

"We've been building it and it's still in operational testing and evaluation, and once that's finished, and we hope it's finished promptly, then we can make a much more thorough assessment of the system," Reed, chairman of the Senate Armed Services Committee, told Bloomberg earlier this week.

"We hope that the answer is delivered soon about the effectiveness of the F-35 and the justification for its billing as the premier fighter aircraft of the world," Reed said.

Maintenance has been slowed by logistics and parts delivery problems, according to officials and various government reports.

The program includes three variants of the plane, and a long-promised, fully functioning Joint Simulation Environment Facility, to test various aspects of the plane's design and equipment in simulated combat scenarios, has not been delivered to the U.S. Navy, according to a report published this week.

Because program officials were slow to contract and install necessary equipment, the Pentagon only recently began tests, still uncompleted, to learn if the F-35 could launch bombs and missiles if an enemy disrupted its GPS signals.

The plane's recurring hardware and software deficiencies have prompted expensive and time-consuming fixes, and a government-mandated deadline for deciding whether manufacturer Lockheed Martin should embark on full-rate production was delayed from 2020.

"You don't drive your Ferrari to work every day, you only drive it on Sundays," Brown said. "This [the F-35] is our 'high end.' We want to make sure we don't use it all for the low-end fight. I want to moderate how much we're using those aircraft."

An independent technical assessment of elements necessary to begin combat testing in an appropriate simulator, by the Johns Hopkins University Applied Physics Lab, the Carnegie Mellon University Software Engineering Institute and the Georgia Tech Research Institute is expected to be delivered by Feb. 28.

"I think the F-35 is going to force us to be much more conscious of sustainment," Reed said, "on how those costs can be lowered, on how we have to look at those systems in terms of their life-cycles, not just how much it costs to build it." 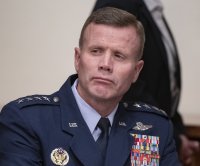 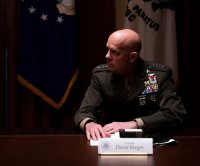