A B-1B Lancer is prepared for divestiture at Ellsworth Air Force Base, S.D., on Tuesday. Photo by Quentin Marx/U.S. Air Force

Feb. 18 (UPI) -- The Air Force has announced plans to begin divesting 17 B-1B Lancers from its current fleet in order to make way for the B-21 Raider.

On Thursday, the service said the retirement of the 17 aircraft will leave 45 in the active fleet and "will not affect the service's lethality or any associated maintenance manpower."

Instead, officials will be able to focus maintenance and depot-level manpower on the remaining aircraft.

"Beginning to retire legacy bombers, to make way for the B-21 Raider, is something we have been working toward for some time," Gen. Timothy Ray, commander of Air Force Global Strike Command, said in a press release.

"Due to the wear and tear placed on the B-1 fleet over the past two decades, maintaining these bombers would cost tens of millions of dollars per aircraft to get back to status quo. And that's just to fix the problems we know about. We're just accelerating planned retirements," Ray said.

According to the Air Force, "a small portion" of the B-1Bs are in a state that would cost an estimated $10 to $30 million per aircraft to get back to a status quo fleet until the B-21 comes online.

"Retiring aircraft with the least amount of usable life allows us to prioritize the health of the fleet and crew training," Ray said. "Our ability to balance these priorities will make us more capable and lethal overall."

In January, the Air Force announced that the first flight of the B-21 Raider is expected in mid-2022 and that a second plane is already under construction.

The Air Force also noted that four of the aircraft being decommissioned will be required to remain in a reclaimable condition.

Defense News // 16 hours ago
Saudi, Qatari, Israeli planes join USAF B-52 in Persian Gulf show of force
March 8 (UPI) -- A U.S. Air Force B-52 bomber joined escort aircraft of Israel, Qatar and Saudi Arabia in a flight over the Persian Gulf, in a show of force aimed at Iran. 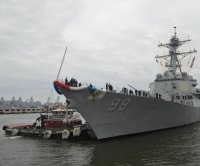