Dec. 24 (UPI) -- USS John McCain conducted what the Navy is describing as a "freedom of navigation operation" near the Con Dao Islands in the South China Sea Thursday.

Thursday's freedom of navigation operation is the second in the region this week.

On Tuesday the McCain navigated near the South China Sea's Spratly islands.

The Chinese government later claimed on state television that the Chinese People's Liberation Army expelled the McCain, but the Navy has contested that claim.

Specifically, the Navy said Thursday's operation was protected under the 1982 Law of the Sea Convention, the international framework for maritime law.

Defense News // 2 hours ago
Afghanistan funds oversight will get more difficult, SIGAR says
July 29 (UPI) -- Conducting oversight against waste, fraud, and abuse of taxpayer funds "will be much more difficult," the Special Inspector General for Afghanistan Reconstruction said in a new report. 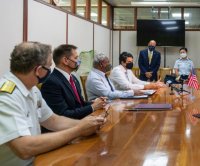