According to the Royal Navy, the fighter jets arrived at RAF Marham in Norfolk Thursday after being deployed from the U.S. Marine Corps base in Yuma, Ariz.

Their flight included one step at Beaufort, S.C.

"Flying that far required an immense amount of skill from the maintainers who prepared the aircraft and the pilots who conducted mission planning, aerial refueling and vertical landings after a nine-hour flight. Realistic training is essential to maintaining our combat readiness," Bodner said.

The F-35Bs will participate in the Group Exercise for several weeks beginning later this month.

After a successful @BAES_Maritime short maintenance period it is great to again stretch our sea legs.

A brief period to get back into the swing of things before a mounting period back alongside @HMNBPortsmouth.

Defense News // 34 minutes ago
NORTHCOM says U.S. must defend interests in the Arctic
April 15 (UPI) -- The U.S. is going to need to develop more persistence in the Arctic region if it wants to be a player there, the commander of U.S. Northern Command told lawmakers earlier this week.

Defense News // 5 hours ago
Army: 'Shortcomings' uncovered in use of helicopters at 2020 protest
April 15 (UPI) -- An Army investigation released Wednesday found that a "systematic lack of understanding" led to the National Guard's use of low-flying helicopters during demonstrations in Capitol One Arena in June 2020. 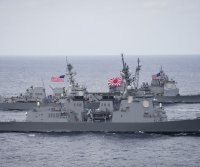