Aug. 18 (UPI) -- Britain's Defense Secretary announced Tuesday that the country will lead a multinational Maritime Training Initiative for the Ukrainian Navy in order to boost Ukraine's ability to combat threats in the Black Sea.

During a visit to Kyiv, Ben Wallace said Britain will send Royal Navy ships to the region later in the fall to train alongside the Ukrainian navy.

"The Maritime Training Initiative is another step forward for the U.K.'s defense relationship with Ukraine," Wallace said. "We have already assisted thousands of Ukrainian personnel in a plethora of skills ranging from basic first aid to operational planning, all of which defends their territorial integrity from Russian-backed separatists."

According to the British Defense Ministry, the Maritime Training Initiative will enable closer collaboration with the NATO Alliance and Armed Forces around the world, and allow Britain to build on Ukraine's new NATO Enhanced Opportunities Partner status.

The Ministry of Defense will increase its support to the Armed Forces of Ukraine by coordinating an international maritime training package that will include courses from the Royal Navy, as well as naval personnel from Sweden, Canada and Denmark.

Wallace also laid a wreath at the Hall for the Defenders of Ukraine in tribute to members of the Armed Forces of Ukraine who have died in combat since the beginning of the conflict in East Ukraine in 2014.

"Today we held fruitful and effective negotiations. The main attention was paid to the discussion of relevant issues of mutual interest. Namely, the assessment of the security situation in Eastern Ukraine and the Azov and Black Sea regions, trends and prospects for its development, as well as ways to respond to emerging threats," Taran said.

"We also discussed the state and prospects of implementation of defence reform objectives, issues of Euro-Atlantic integration, in the context of maximizing the use of new instruments of defense and military cooperation, which Ukraine received with the status of NATO's Enhanced Opportunities Partner."

U.S. Defense Secretary Mark Esper also expressed his support for the initiative on Twitter on Tuesday.

Supporting Ukraine's capacity to defend itself against Russian aggression: a welcome @BWallaceMP announcement of a Maritime Training Initiative in Ukraine to complement US and @NATO support. The @DeptofDefense urges all allies to increase support for Ukraine. https://t.co/d9tmnrKxij— Dr. Mark T. Esper (@EsperDoD) August 18, 2020

Defense News // 15 hours ago
BAE launches Anson submarine at British worksite
April 20 (UPI) -- BAE launched Anson, the fifth of seven Astute-class attack submarines it is building for the British Royal Navy, at its worksite in Barrow-in-Furness, Cumbria, in Britain. 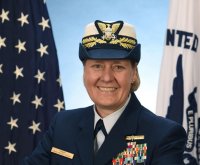