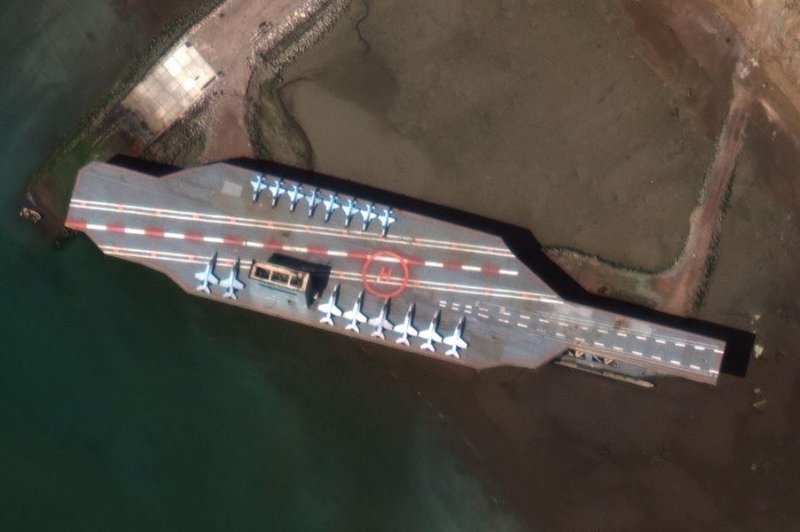 Iran towed a non-operating replica of a Nimitz-class U.S. aircraft carrier into the Strait of Hormuz on Sunday. Photo courtesy of EPA-EFE/Maxar Technology

July 27 (UPI) -- Iran has towed its replica of a U.S. aircraft carrier into the strategic Strait of Hormuz, satellite photographs indicate.

The replica, similar to one used in 2015 for bombing exercises to demonstrate that Iran can strike U.S. aircraft carriers, was moved on Sunday, the Jerusalem Post reported on Monday.

Iranian state media have made no mention of the action. A tugboat pulled the model, believed to be a barge with a covering simulating an aircraft carrier, into the strait from the port city of Bandar Abbas, Sky News reported.

The U.S. Navy's 5th Fleet, which patrols the area, remains "confident in our naval forces' ability to defend themselves against any maritime threat," said Commander Rebecca Rebarich, 5th Fleet spokesperson.

"We cannot speak to what Iran hopes to gain by building this mock-up, or what tactical value they would hope to gain by using such a mock-up in a training or exercise scenario. We do not seek conflict, but remain ready to defend U.S. forces and interests from maritime threats in the region."

The simulated aircraft carrier resembles the 980-foot-long USS Nimitz, except that it is shorter by about 300 feet.

The dummy vessel carries 16 replicas of fighter planes on its deck, satellite photos indicate, and is similar to a target used in a 2015 military exercise. In that exercise, Iranian troops fired machine guns and rockets from speedboats, and eventually sank the fake carrier with a surface-to-sea missile.

The genuine USS Nimitz and its carrier strike group entered the 5th Fleet area of operations last week as a presence in the Middle East. The United States generally stations at least one aircraft carrier and its strike group in the area. 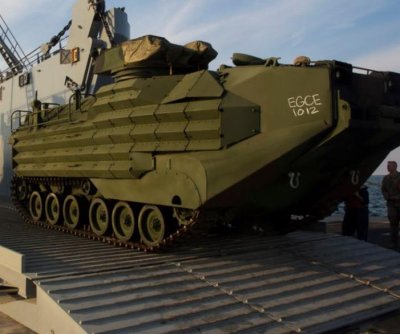