About 16 of 850 cadets who have returned so far to the U.S., Military Academy at West Point, N.Y., for their June 13 graduation ceremonies have tested positive for the coronavirus, an Army spokesperson said on Monday. Photo courtesy of USMA

June 1 (UPI) -- As many as 16 cadets returning to the U.S. Military Academy for graduation ceremonies have tested positive for the coronavirus, the U.S. Army said on Monday.

The graduating seniors of the West Point, N.Y.,academy, about 40 miles north of New York City, returned to their homes across the country after classes were cancelled in May, but were recalled for the June 13 festivities, USA Today and CNN reported.

President Donald Trump is scheduled to give the commencement address. Returning cadets are subject to an elaborate protocol which includes avoidance of New York City as they return to West Point, and a quarantine period when they arrive. About 850 of 1,000 graduating cadets have returned so far.

"The Army and West Point have done meticulous planning to ensure the health and safety of the returning cadets of the U.S.Military Academy's Class of 2020," an Army spokesperson said on Monday.

"There is mandatory screening for all and we've had a small number, about 1.5 percent, test positive. This was anticipated. None were symptomatic, and no cadet has contracted [the virus] through person-to-person contact while under the Army's care. Those who test positive are isolated, and receive appropriate care and attention, while we continue an orderly reintegration of our cadets."

In contrast, the U.S. Naval Academy conducted a virtual graduation in May, with pre-recorded remarks by Defense Secretary Mark Esper, as well as five separate post-graduation swearing-in ceremonies for the graduates, now new Navy officers, at the Annapolis, Md., campus.

Trump's plans to speak at West Point have been criticized as a needless political stunt potentially endangering the cadets lives, although Army officers noted the graduates needed to return to the campus to pass physical examinations and recover personal belongings.

RELATED Coronavirus was already spreading in U.S. in January: Study 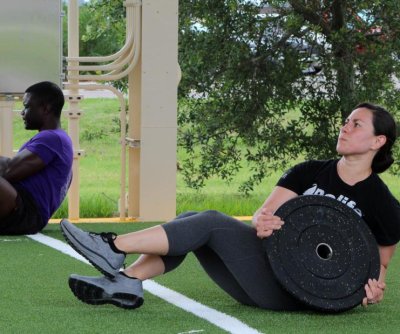 Defense News // 18 hours ago
Pentagon, VA adapting as number of COVID-19 cases grows
July 7 (UPI) -- The Pentagon has opened an outdoor facility for "safe and socially distant workouts," and officials are closely monitoring and adapting as COVID-19 cases among active duty and retired members of the military grow.

Defense News // 5 days ago
Number of COVID-19 cases among military service members doubled in June
July 2 (UPI) -- The number of cases of coronavirus among active-duty military personnel has more than doubled in the past three weeks, according to information published by the Department of Defense.