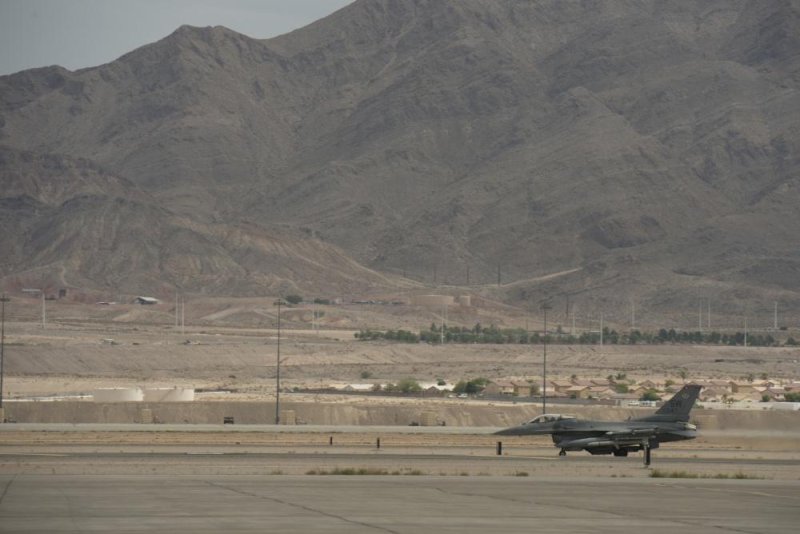 Nellis Air Force Base, Nev., shown here in 2015, has been selected as the fifth military installation for construction of an experimental 5G network. Photo by Adrian Cadiz/U.S. Air Force

May 28 (UPI) -- The Office of the Under Secretary of Defense for Research and Engineering and the U.S. Air Force Warfare Center are working together to build a fifth-generation, or 5G, cellular network, for testing at Nellis Air Force Base in Nevada, according to the Pentagon.

"We expect to start construction on the network at Nellis in July and have it fully operational in January of next year," Evans said.

According to the Department of Defense, the network will feature relocatable cell towers that can be set up and taken down in less than an hour, and testing will involve mobile operations centers where team members can use the network while on the move.

Only users participating in testing will have access to the network, the Pentagon said.

Testing at Nellis will begin in January 2021 and continue in three year-long phases.

Nellis is the fifth military base the Pentagon has selected for 5G prototyping and experimentation.

Utah's Hill Air Force Base announced in November that it will test use of the technology in congested environments.

Joint Base Lewis-McChord in Washington state, Naval Base San Diego in California, and Marine Corps Logistics Base in Albany, Ga., have also been selected for 5G testing.

While the DoD is investing in 5G testing at its own facilities, Pentagon officials have also been sharply critical of the proposal for a nationwide 5G network put forward by Ligado Networks and approved by the Federal Communications Commission earlier this spring.

That proposal would allow Ligado to build a network using the L-band spectrum that runs adjacent to the spectrum used for global positioning systems, which form the basis for most mapping software.

The FCC has maintained that it intends to go forward with the buildout as planned, but other federal agencies -- including the National Telecommunications and Information Administration -- have petitioned the FCC to rescind its approval of the Ligado proposal.