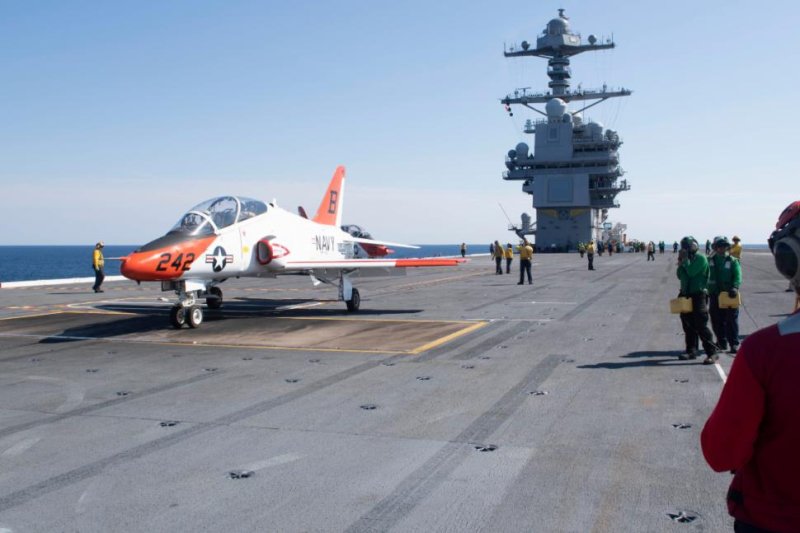 May 13 (UPI) -- The aircraft carrier USS Gerald R. Ford completed readiness projects to board 1,000 personnel for an upcoming assignment -- which will include integrating with a carrier air wing and carrier strike group -- the Navy said on Wednesday.

The ship underwent required maintenance and new construction tasks in its "window of opportunity" in Norfolk, Va., to prepare it for an at-sea period, Independent Steaming Event, or ISE, 10.

The action will involve personnel and aircraft of Carrier Air Wing 8 and Carrier Strike Group 12, meaning that more fixed-wing and rotary aircraft will be aboard the ship than usual.

"This will be the first time Ford has brought on an air wing and our CSG staff, so we're intentionally going to stress the ship's systems and the crew to see how well we integrate as one cohesive unit," Capt. J.J. Cummings, the ship's commanding officer, said in a statement.

"This is our first opportunity to conduct cyclic flight operations with an air wing. Our crew continues to work hard to make preparations, maintain equipment, conduct training, and remain healthy to ensure we are ready to carry out our mission to fully support integrated air wing operations," Cummings said.

The aircraft carrier was improved to provide over 125 offices and berthing spaces for officers, and its food stores sections were expanded. With the addition of new personnel, the ship will carry about 3,700 sailors.

"To sustain the full complement of Ford and air wing personnel, Ford's supply department on-loaded more than 400 pallets of stores and began coordination for a Replenishment-at-Sea to refresh fruits and vegetables while underway," said Cmdr. Carl Koch, the ship's supply officer.

The work comes with an eye toward reducing exposure to the coronavirus, Cummings noted.

"There's value in being able to provide specialized training to Sailors," he said. "Like many industries across the nation, we've had to adapt during the coronavirus pandemic, and we've found innovative ways to provide quality training while keeping in compliance with COVID-19 mitigation protocols and best practices."