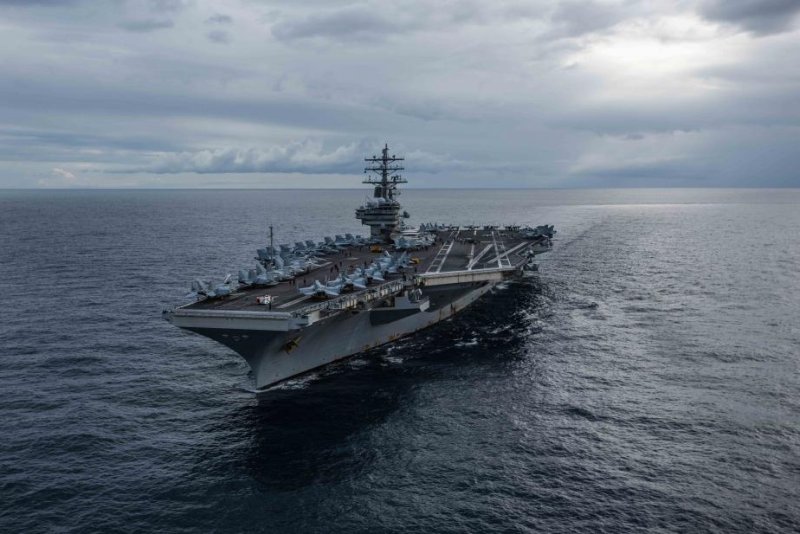 May 8 (UPI) -- The Puget Sound Naval Shipyard and Intermediate Maintenance Facility successfully completed a maintenance availability for USS Ronald Reagan this week -- a project that took 98,000 man-hours and five months to complete, according to the Navy.

The complications have added to work on vessels in port and deployed, including work by the Reagan's maintenance teams and ship's crew making repairs to the ship's electrical, mechanical and fluid systems and modernized combat systems and aviation structures onboard the carrier.

Work continued as the novel coronavirus spread globally, requiring crews to quickly implement public health measures like social distancing, the use of masks, increased cleaning of work areas and the use of flexible or alternative work schedules.

"Our primary concern in finishing this availability was to ensure everyone's safety while still accomplishing our mission," Project Superintendent Monte Levin said in a Navy statement. "When Ronald Reagan arrived at Berth 12 for the start of its availability last December [2019], the world looked very different. Words like social distancing and quarantine were unfamiliar to most of us.

Navy officials say the service has rapidly adapted strategies for containing outbreaks of the virus aboard ships, including the USS Kidd, which reported an outbreak in April.

Vice Adm. Richard Brown, the commander of Naval Surface Forces and Naval Surface Force Pacific, told USNI News leadership immediately shut down gyms and other common areas, switched the galley to self-serve and ported the vessel as soon as possible to "create a virus-free bubble" on the Kidd.

"If it gets on, it's on the ship. And you can slow and arrest the spread, but at some point, you start losing the battle, and that's when you have to take more urgent and decisive action, and that's what we did with Kidd," Brown said. "If we had left her out there, I would say at some point the entire crew would have been infected in a number of weeks."

Also this week, the U.S. Pacific Fleet's senior leaders returned from visiting Guam, where the USS Theodore Roosevelt has been docked since the end of March due to a COVID-19 outbreak on board.

Both leaders are self-quarantining in Hawaii, and said they were impressed by the crew's commitment to cleaning and containing the outbreak as they prepare to return to sea -- appreciative of the support sailors of received from the governor and people of Guam.

Sailors have received support in the form of care packages in the form of personal items, snacks and comfort items, as well as Wi-Fi, phones for Sailors to call family back home, laundry services and transportation.

"After being able to get to Guam and seeing the operation in action, Fleet Master Chief James Honea and I were enormously impressed, having watched the Sailors fight through this adversary to get back on their ship," Fleet Commander Adm. John C. Aquilino, who is self-quarantining in Hawaii, said in a statement. "I'm more proud than ever having seen firsthand what our Sailors have had to do."