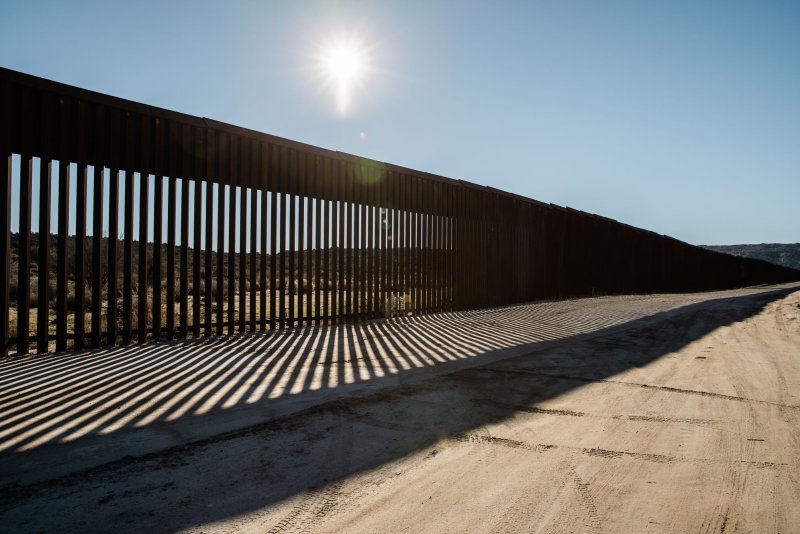 View of the border wall in Jacumba, Calif., that separates the United States and Mexico in January 2019. Photo by Ariana Drehsler/UPI | License Photo

April 14 (UPI) -- The Army has awarded BFBC a $569 million contract modification to build sections of wall on the U.S.-Mexico border near San Diego and El Centro, Calif.

Under the deal, announced Monday by the Department of Defense, BFBC, an affiliate of Bozeman, Mont.-based Barnard Construction is contracted to design and build 17.17 miles of border wall in southern California.

This week's deal modifies a contract awarded in May 2019 for wall construction in El Centro and Yuma, Ariz.

Construction on the Yuma sector of the wall began in September 2019, and the San Diego project was underway by December.

The Arizona Republic reported in December that that group of wall projects were funded after 128 military projects were canceled under Section 2808, which gives the Pentagon emergency construction authority under President Donald Trump's emergency declaration for the border issued in 2019.

Last week four Democratic congressmen, three of whom represent districts along the southern border of the United States, wrote a letter demanding construction of the wall be halted due to the coronavirus pandemic and direct the funds to stop the outbreak.

But neither that letter nor a judge's ruling issued earlier this month -- allowing lawsuits opposing the wall to proceed -- appears to have had an effect on contract awards this spring.

At the beginning of April, SLSCO was awarded a $61.4 million contract for border wall construction near El Paso, Texas, and Southwest Valley Constructors received $524 million to replace a section of wall near Tucson, Ariz.

Defense News // 5 hours ago
Esper sends some troops home after D.C. deployment
June 4 (UPI) -- The Department of Defense is returning some members of active duty units that had deployed to Washington, D.C., to their home bases, a senior Pentagon official said Thursday.