Chuck Hoskin, Jr., the principal chief of the Cherokee Nation and Victoria Mitchell Vazquez, the ship's sponsor and deputy speaker of the Cherokee Nation Tribal Council, attended the Navy's ceremony Wednesday to authenticate the keel for the new vessel, which will be the second ship in the Navy's Navajo class of towing, salvage and rescue vessels.

The keel serves as the symbolic backbone of a ship, and the keel laying ceremony formally marks the start of a ship's life and the joining of its modular components.

"We are honored to have so many representatives of the Cherokee Nation in attendance to celebrate this early milestone," said Mike Kosar, support ships, boats and craft program manager of Program Executive Office Ships, a Defense Department division that manages the design and construction of several classes of vessels for the military and foreign military sales. "The ship is critical to the operations of our fleet, and will soon sail with the pride and determination of the Cherokee people, which it is named to honor."

The Navajo-class ships will be able to tow U.S. Navy ships and carry a load of 2,000 tons. 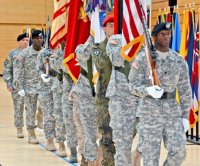 Defense News // 1 day ago
Low flight hour causing more military crashes: report
Dec. 3 (UPI) -- Flight hours are down and training waivers are on the rise among military pilots, making military flights riskier, according to a new report from a commission convened to investigate the cases of military aviation crashe