The new helicopters are the Navy's Advanced Helicopter Training System Program, and come as part of an overall deal that will deliver 130 of the aircraft to the branch by 2024. 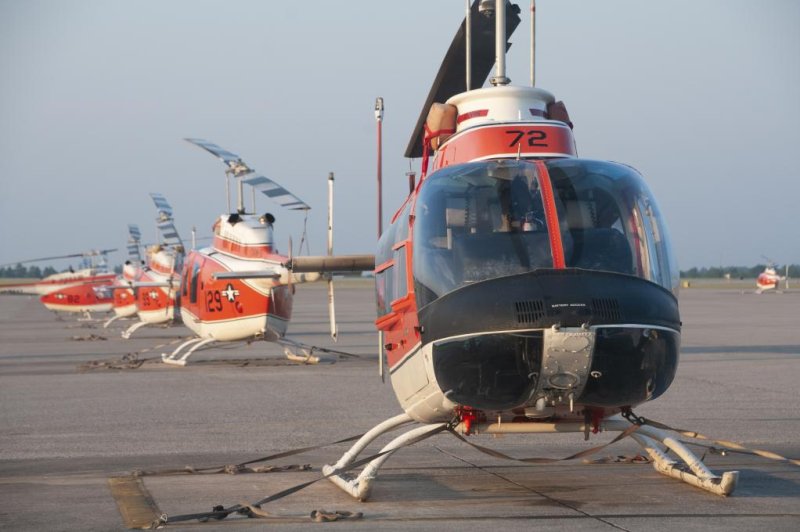 TH-57 Sea Ranger helicopters assigned to Training Air Wing 5 sit on the flightline at Naval Air Station Whiting Field in Milton, Fla. The Navy has awarded a contract for the first 32 TH-37As, which will replace the 35-year-old aircraft. Photo by Michelle Tucker/U.S. Navy

Jan. 14 (UPI) -- Leonardo subsidiary AgustaWestland will deliver 32 advanced helicopters for the U.S. Navy per a $176.5 million announced this week by the Department of Defense.

The deal, announced Monday by the Pentagon, is a base-year contract coming under a total $648.1 million contract for 130 of the aircraft to be delivered through 2024, starting this year.

The new helicopters will replace the 35-year-old TH-57, which Navy officials say have become more difficult to maintain because of their age, in addition to their lacking modern cockpit avionics and other performance capabilities pilots need to train with.

"Today marks a great team effort to procure and deliver a helicopter trainer for the next generation of helicopter and tilt-rotor pilots for the Navy, Marine Corps, and Coast Guard," said James F. Geurts, assistant secretary of the Navy for research, development and acquisition. "I'm proud of the aggressive work the team did to leverage the commercial industrial base to get this capability to the warfighters, and our nation, at the best value to the taxpayer. This effort is key to ensure the readiness of our Naval Aviators for decades to come."

The contract, which was awarded through a competitive process and received five bids, funds the production of new TH-37A helicopters, which will meet advanced rotary wing requirements for the Navy as well as the Marine Corps and Coast Guard through 2050.

"The new Leonardo TH-73A helicopters are the cornerstone of AHTS, which is the planned replacement to address the capability and capacity gaps of the current aging TH-57 Sea Ranger helicopter training platform," said Capt. Todd St. Laurent, Naval Undergraduate Flight Training Systems Program Manager. "The TH-73A will provide a modern helicopter training platform that will serve rotary and tiltrotor training requirements into the foreseeable future. These new helicopters will ensure the Navy has capacity to train several hundred aviation students per year at Naval Air Station Whiting Field in Milton, Florida."

The bulk of production work will take place with AgustaWestland's worksite in Philadelphia, with some work also taking place at Mineral Wells, Texas, and some at locations outside the continental United States.