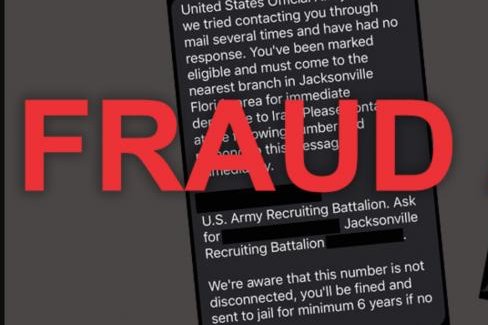 Jan. 8 (UPI) -- United States Army Recruiting Command and Selective Service have cautioned the public not to heed rumors of an upcoming military draft -- or text messages claiming the recipient has been selected for a draft.

In a press release, U.S. Army Recruiting Command said the office has received "multiple calls and emails" about text messages informing individuals they have been selected for the military draft.

Those texts are false and do not originate with Recruiting Command or any other part of the Army, the statement said.

Selective Service has also clarified on its Twitter and Facebook pages that there is no military draft currently in effect.

"The Selective Service System is conducting business as usual," said a Friday post on Selective Service's Facebook page. "In the event that a national emergency necessitates a draft, Congress and the President would need to pass official legislation to authorize a draft."

The statement from Recruiting Command also said that Army recruiting operations are "proceeding as normal."

"The draft has not been in effect since 1973. The military has been an all-volunteer force since that time. Registering for the Selective Service does not enlist a person into the military," said the statement from Recruiting Command.

The Selective Service also tweeted Friday that its website had crashed because of high interest due to "the spread of misinformation."

Rumors of a possible draft began swirling in the aftermath of the drone strike that killed Iranian commander Qassem Soleimani and subsequent military strikes from the U.S. and Iran.

All American men between the ages of 18 and 25 have to register for Selective Service, which they generally do while signing up for a driver's license or applying for federal aid for college.

But the draft was abolished in 1973, and reinstating it would require an act of Congress signed by the president.

"Registration is ongoing. A draft would require an act of Congress," Joe Heck, the chairman of the National Commission on Military, National and Public Service, told The New York Times.