The USNS Burlington, which was delivered to the U.S. Navy less that a year ago, will undergo modifications to its bow by shipbuilders Austral USA, the Defense Department announced on Tuesday. Photo by Brian Siriani/U.S. Navy

Austral USA's Mobile, Ala., shipyard will modify the ship's bow to "10-knot Sea State 5" standards, the Navy said Tuesday in a contract announcement.

The ship, delivered to the Navy in November 2018, is the 10th Spearhead-class Expeditionary Fast Transport vessel. Owned by the Military Sealift Command, its missions include overseas contingency operations, humanitarian assistance and special operations forces support.

At 338 feet in length it is designed to carry up to 600 tons of cargo, 312 troops and MSC attachments over 1,300 miles between refueling, at an cruising speed of 40 miles per hour.

Testing on a previously-built EFT ship, the USNS Spearhead, showed damage from waves striking its forepeak, the bottom of the foremost part of the flat hull section spanning the two catamaran hulls. Repairs to the ship cost about $511,000 and included structural reinforcement of the bow.

At "Sea State 5," when waves reach eight to 13 feet in seas considered "rough" on the World Meteorological Organization sea state code, the ship must slow to five knots, or 5.7 mph.

The USNS Burlington is expected to receive a similar modification.

Work is expected to be completed by February 2020, a Defense Department statement said on Tuesday. 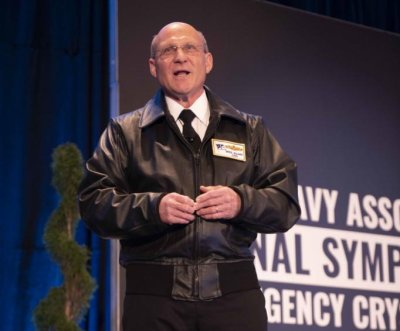