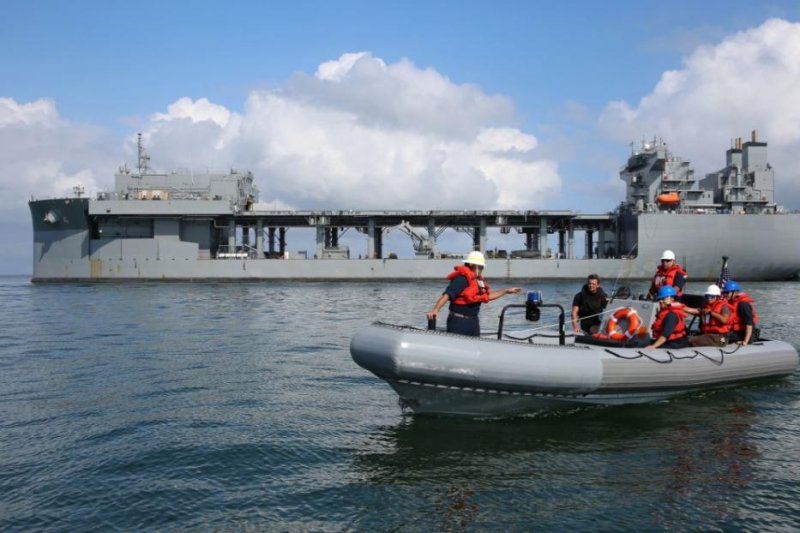 Sept. 23 (UPI) -- The U.S. Navy announced it completed a three-day test of a mine countermeasures system in Chesapeake Bay, Md., aboard an expeditionary sea base vessel using components from a littoral combat ship.

The USNS Hershel "Woody" Williams, a variant of an expeditionary transfer dock, was used as a test bed for sailing with a Littoral Combat Ship Mine Countermeasure Mission package portable control station to maneuver the mine countermeasures equipment, as well as the launch and recovery equipment, the Navy said in a statement Friday.

Command and control of unmanned vehicles was also tested in the three-day mission, the Navy said.

"Considering the contested environments which our ships sail in, counter-mine capabilities are very important because we have to be able to keep the enemy at bay," said Capt. David Gray, officer in charge of the ship.

The test demonstrated the capability of the ships in the Montford Point-class of expeditionary transfer docks to serve as a mine countermeasures platform. The ships are demonstrating unexpected versatility and adaptability.

The USNS Hershel "Woody" Williams is 784 feet long and features a 52,000-square-foot flight deck, fuel and equipment storage, repair spaces, magazines, and mission-planning spaces. The vessel is able to accommodate up to 250 personnel, and the ship can support missions, mine countermeasures, counter-piracy operations, maritime security operations, humanitarian aid and disaster relief missions and crisis response operations.

"Mines of today are very inexpensive to make," Gray said. "Our adversaries can produce mines for a few hundred dollars and inflict a tremendous loss of life while causing millions of dollars of damage, so we need the assets out there to detect and destroy these threats ahead of time, and keep the world's shipping lanes open."

Defense News // 9 hours ago
Five companies picked for prototypes of Bradley M2 tank replacement
July 26 (UPI) -- Five defense contractors have been awarded contracts for the second phase of development of the Optionally Manned Fighting Vehicle, which is planned to replace the M2 Bradley tank.