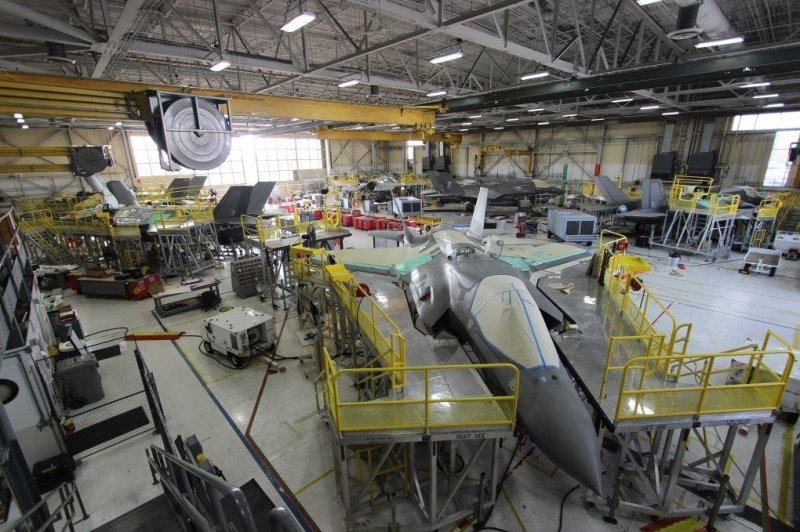 The U.S. Navy has announced a laser shock peening facility at Cherry Point, N.C., and a $74.9 million electronic warfare contract with BASE Systems, on Tuesday to improve the F-35's electronic warfare system. Photo by Heather Wilburn/U.S. Navy/UPI

The contract comes as the U.S. Navy announced the opening of a laser shock peening facility at the Fleet Readiness Center East at Marine Corps Air Station Cherry Point, N.C, to bring a new strategic capability to the Center and to the F-35B Lightning aircraft line. When the new F-35 laser shock peening facility is fully operational in 2020, FRCE will be one of two sites in the world that will use laser technology to strengthen F-35 structural components.

The electronic warfare system upgrades contract announced on Tuesday provides the pilot with maximum situational awareness, helping to identify, monitor, analyze, and respond to potential threats. It includes advanced avionics and sensors to provide a real-time view of the battlespace to provide the pilot with options to evade, engage, counter or jam threats. It offers all-aspect broadband protection, allowing the F-35 to suppress enemy radars and provides the aircraft with radio-frequency and infrared countermeasures, and rapid response capabilities.

"The F-35 will be in service for decades, and we're committed to providing our pilots with an AN/ASQ-239 capability that affords a decisive and sustained EW operational advantage," Deborah Norton, BAE Systems vice president of F-35 solutions, said in a press release. "Our robust, modular architecture enables us to efficiently insert new capabilities, supporting the next wave of technical innovation while proactively addressing total product lifecycle sustainability."

The contract, for 1,440 systems and maintenance and repair of test stations in their support, calls for a completion date of March 2022. The U.S. Air Force, Navy and Marines, as well as Foreign Military Sales partners, will share in the contract's cost.

The state-of-the-art laser shock peening process will allow FRCE to conduct heavy structure modifications to strengthen areas of the F-35's airframe without disassembling the entire aircraft. The process can strengthen designs without adding additional metal or weight, and has been used on the F-22 Raptor and in aircraft component manufacturing.

"It's very exciting," Donald Jeter, portfolio manager of the F-35 line at the FRCE, said in a press release. "Being able to perform this laser shock peening process adds a huge strategic capability to our depot. With it, we'll be able to provide a critical support element to the F-35B program and act as a force multiplier for the fleet and the warfighter."

RELATED Pentagon: Cost of F-35 fighter plane program up by $25B

Defense News // 3 days ago
Space Force seeks greater autonomy in report to Congress
May 22 (UPI) -- The U.S. Space Force requested flexibility from Congress to purchase and use satellites, saying it needs more agility to keep pace with adversaries.