Britain's Royal Air Force intercepted Russian aircraft in two separate incidents Thursday, one near British airspace and the other near Estonian airspace.

Typhoon fighters of Britain's Royal Air Force made two separate interceptions of Russian aircraft on Thursday, one approaching British airspace and the other near Estonia. File Photo courtesy of British Ministry of Defense | License Photo

RAF Typhoons flying from Lossiemouth in Scotland and Amari in Estonia each made interceptions.

The aircraft flying from Lossiemouth monitored Tu-142 Bear patrol aircraft as they approached British airspace, escorting them away from Britain's sovereign airspace.

"Protecting NATO and UK airspace is what RAF is here for, so today's mission gave us the opportunity to demonstrate that we will always police our area of interest," said one RAF Typhoon pilot involved in the interceptions," adding that the actions display "how well trained the Typhoon force is for dealing with events like this."

The intercepts were not the first for the Royal Air Force even in the last week.

British aircraft, flying from Estonia's Amari air base, intercepted five Russian aircraft in two days last week. The intercepts were conducted over the Baltic Sea in in international airspace but near the airspaces of Estonia and Lithuania.

The following day the Typhoons investigated the passage of a Tupolev Tu-134, a commercial plane modified for the military with extra radar equipment as used as a training plane.

The British planes patrolling the Baltic Sea from Estonia are part of NATO's Baltic Air Policing mission. Since they took over the duties in May from Germany's air force, British planes have scrambled 17 times for an intercept.

Russian aircraft often fly close to the coast as they transit to Kaliningrad, a Russian enclave that lies on the Baltic coast between Poland and Lithuania.

"This is a routine NATO mission for the Typhoons which provides reassurance that the UK is here to work in partnership with Estonia," a statement by the British government said. 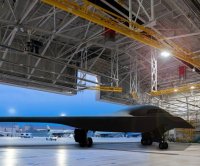