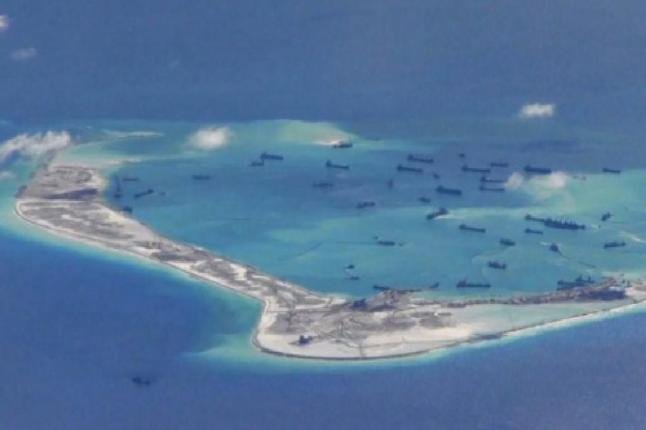 Mischief Reef is one of several man-made structures in the disputed South China Sea near the Spratly Islands that has been built up by China. The Pentagon this week expressed concern about a missile launch from near the islands, though an exact location of the test has not been revealed. Photo courtesy of U.S. Navy

Over the weekend, China carried out an anti-ship ballistic missile test and fired at least one missile into the South China Sea, which contains several hundred tiny islands claimed by China, Taiwan, Vietnam and other countries.

Among them are the Spratly Islands, where a buildup of Chinese military installations has been seen. Observers said the missile may have been a DF-21D anti-ship ballistic missile, known as a "carrier killer" and capable of crippling an aircraft carrier.

China previously moved land-based anti-ship cruise missiles to it's military stations in the region, a crucial shipping route where $3.4 trillion in goods travel each year.

"Of course the Pentagon was aware of the Chinese missile launch from the man-made structures in the South China Sea near the Spratly Islands," Pentagon spokesman Lt. Col. Dave Eastburn said. "What's truly disturbing about this act is that it's in direct contradiction to President Xi's statement in the Rose Garden in 2015 when he pledged to the U.S., the Asia-Pacific region, and the world, that he would not militarize those man-made outposts."

The tests came as the United States and China agreed, at the G-20 weekend summit in Osaka, Japan, to restart trade talks and commit to avoiding new tariffs on imported goods.

Analysts suggested that the missile tests were a means to improve Beijing's bargaining power in upcoming trade talks.

"When you're about to sit back down at the negotiating table, you want more cards in your hand, and this was a tactic," Shanghai-based military scholar Ni Lexiong said.

He added that U.S. tariffs have put China under economic pressure, and that China remains angered by U.S. support for Taiwan and Hong Kong.

"The ultimate backing for diplomatic effort is absolute power, military might, and in the case of the U.S., that's their 11 aircraft carrier strike groups. But the DF-21D is something that could pose a threat to that."

China warned that parts of the South China Sea would be affected by military drills during a five-day period ending on Wednesday, but did not mention missile tests.