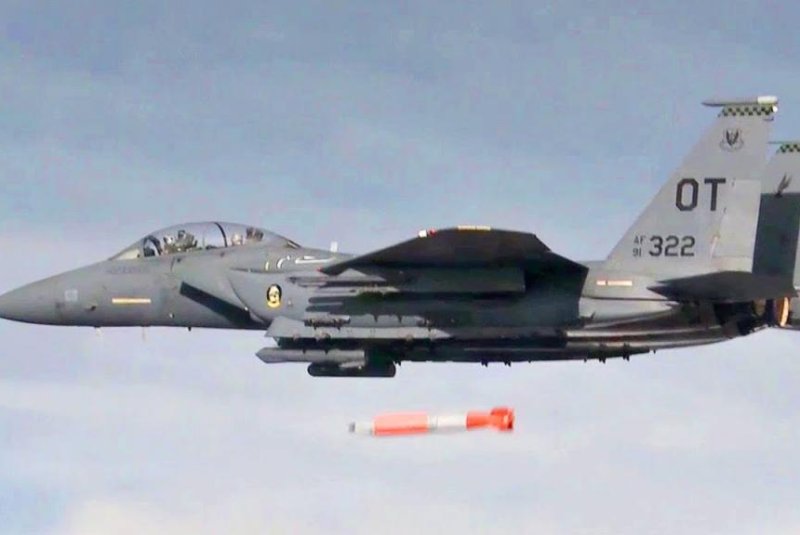 An F-15E drops a B61-12 test unit during a development flight test at the at the Nevada Test and Training Range on July 21,2015. Screenshot from video by Staff Sgt. Cody Griffith/U.S. Air Force

The new contract modification, which covers Lot 1 and Lot 2 long lead items, brings the cumulative value of the previously awarded contract to $131.9 million, the Defense Department announced Friday. Fiscal year 2018 and 2019 procurement funds, and fiscal year 2019 research and development funds in the amount of $29.2 million are being obligated at the time of award.

Work will be performed in Saint Charles, Mo., with completion expected by Aug. 31, 2020.

The National Nuclear Security Administration, which is part of the Energy Department, maintains and enhances the U.S. nuclear weapons arsenel without nuclear explosive testing.

"The B61-12 Life Extension Program is essential to enabling the NNSA to accomplish its mission to certify the effectiveness of the nation's nuclear deterrent," according to the agency.

With almost 50 years of service, the B61 nuclear gravity bomb, deployed from U.S. Air Force and North Atlantic Treaty Organization bases, is the oldest and most versatile weapon in the U.S. stockpile.

Numerous modifications have been made to improve the B61's safety, security, and reliability, and four B61 variants remain in the stockpile: the 3, 4, 7, and 11.

"However, the aging weapon system requires a life extension to continue deterring potential adversaries and reassuring our allies and partners of our security commitments to them," the agency said.

The NSSA wants to extend the life of the B61 nuclear gravity bomb by at least 20 years, as well as increase the security, performance and safety of the weapon system.

The first production of the 12-variant unit will occur in fiscal year 2020. The bomb will be approximately 12 feet long and weigh about 825 pounds.

The NNSA has asked for $793 million in fiscal year 2020 to continue developing and begin production of the B61-12 gravity bomb life-extension program, and $899 million to refurbish the existing warhead by the new air-launched cruise missile under development by the Air Force, according to the Arms Control Association.