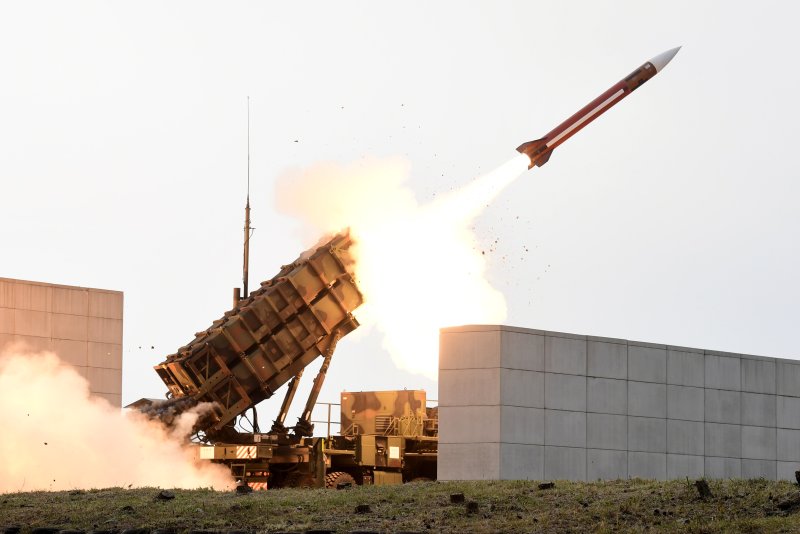 A Patriot missile is fired at a shooting range in Daecheon, South Chungcheong Province, South Korea, in November 2017. The Pentagon wants to develop better technology and spend more money to counter threats from China and Russia. File Photo by Yonhap/EPA

High-level officials appeared before the Senate Armed Services Committee's strategic forces subcommittee Wednesday to describe the importance of increased defense spending in the Pentagon's budget request for next year.

In March, the Defense Department requested $718.3 billion in a strategy that "fully recognizes that future wars will be waged not just in the air, on the land, and at sea, but also in space and cyberspace, increasing the complexity of warfare. It modernizes capabilities across all warfighting domains to enhance lethality."

Although the spending remains near a record low as a share of the U.S. economy, the spending handles threats posed by China and Russia "through maintaining our competitive advantage."

"In fiscal year 2020, we will continue to build a more lethal and ready Air Force, while fielding tomorrow's Air Force faster and smarter," Secretary of the Air Force Heather Wilson and Air Force Chief of Staff Gen. David L. Goldfein said in a joint posture statement to the committee. The hearing was the third congressional appearance of the week by Wilson and Goldfein.

The independent and bipartisan National Defense Strategy Commission mentioned a vision for building "the Air Force we need."

"Regardless of where the next conflict occurs or which adversary it features, the Air Force will be at the forefront," the Commission said.

John C. Rood, the undersecretary of defense for Policy, described how adversaries are developing sophisticated ballistic and cruise missile systems that include increased speed, range, accuracy and lethality. He noted how an enemy's hypersonic glide vehicle maneuvers outside traditional trajectories, and is more difficult to track and destroy.

Rood mentioned the missile when responding to a question from Sen. Josh Hawley, R-Mo., about the importance of low-yield tactical nuclear weapons to deter threats.

He said the current "sub-launched cruise missile is further behind, and we're just doing an AoA or analysis of alternatives at this stage."

The issue also was brought up at a House committee meeting last week.

Rep. Susan Davis, D-Calif., said she was unconvinced such weapons are needed.

Rood outlined several ways the Pentagon is beefing up it defensive posture. To deter Russia, they include more resources in Alaska: an additional 20 ground-based interceptors to 64, a new missile field at Fort Greely, and new discrimination radars in Alaska as well as Hawaii, and operations extended for the sea-based X-band radar.

In innovation and technology, $3.7 billion is sought for drones, $927 million for artificial intelligence, $2.6 billion for hypersonic weapons development,

The United States is not alone in beefing up defense. Rood said the Pentagon is working with NATO, Spain, Turkey, Romania, Poland, Gulf partners in the Middle East, Israel, Japan and other nations.