Air Force officials said the planned purchases of a new version of the fourth generation aircraft do not signal a pullback on the F-35, but rather they are filling another, separate need. 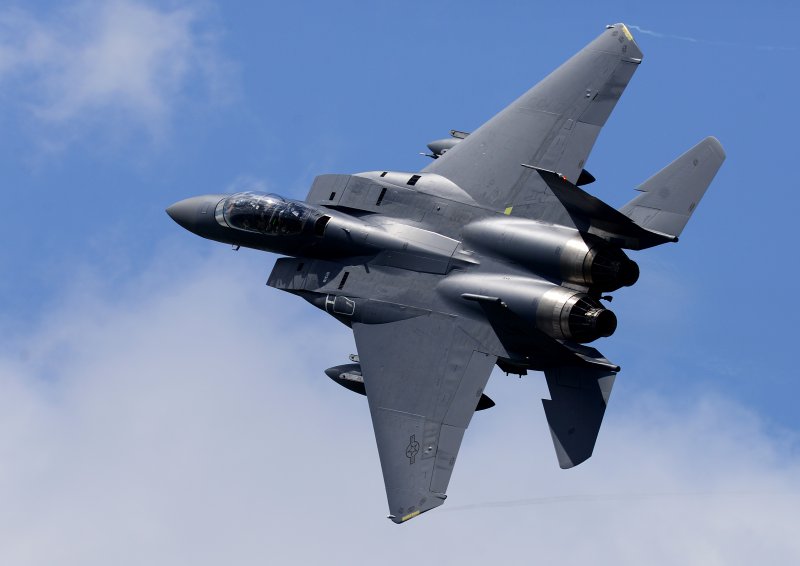 March 19 (UPI) -- The Air Force intends to spend nearly $7.9 billion over the next five years to restock its F-15 fleet with upgraded versions of the fighter aircraft, a Defense Department budget estimate shows.

The document, which Air Force Magazine reported was released Monday, indicates the Air Force plans to procure 80 F-15EX aircraft between fiscal year 2020 and fiscal year 2024 for a total cost of $7.8 million.

The new F-15 aircraft will be based on the F-15QA fighters Boeing has been contracted to produce for Qatar's military, the Air Force said.

They will be able to handle a crew of up to two people each and will include the Eagle Passive Active Warning and Survivability System and the Suite 9.1 Operational Flight Program software.

First flown in 1972, the F-15 can max out at speeds more than twice the speed of sound. It has already undergone a number of upgrades since the 1970s.

In a January Defense News article, Air Force Chief of Staff Gen. David Goldfein said any effort to update the military branch's F-15 fleet would not represent a pivot away from its F-35 aircraft.

"I'm not backing an inch off of the F-35," Goldfein told Defense News. "The F-35 buy that we're on continues to remain on track. And I'm not interested in taking a nickel out of it when it comes to buying anything else in the fighter portfolio."

Defense News // 18 hours ago
U.S. Space Force to take over SATCOM operations from Army, Navy
Sept. 22 (UPI) -- The U.S. Space Force will take over satellite communications billets, funding and mission responsibility from the U.S. Army and Navy, the Department of Defense announced Wednesday.