USS George Washington gets its mast, part of four-year overhaul

March 18 (UPI) -- Defense contractor Huntington Ingalls Industries announced the installation of the mast on the aircraft carrier USS George Washington, part of a $2.8 billion overhaul of the ship.

The four-year "refueling and complex overhaul" at Newport News Shipbuilding, a division of Huntington Ingalls in Newport News, Va., is now half complete, the company said in a statement on Friday after the 34-foot upper mast was attached. The mast now rises 123 feet above the carrier's flight deck. Work on the vessel is expected to be completed by August 2021.

"Landing the upper mast is one of the most visible construction milestones in the mid-life refueling overhaul and maintenance availability of an aircraft carrier," said Chris Miner, Newport News' vice president of in-service aircraft carrier programs.

"We are making significant progress with George Washington and look forward to returning a fully recapitalized, mission-ready ship to the fleet for another 25 years of service."

The ship's personnel held a brief ceremony in honor of the achievement, known as mast-stepping. Recognizing an old maritime custom, they placed a coin beneath the ship's mast, and a time capsule containing photos, a piece of the old mast and other artifacts was attached to a metal plate to be welded under the mast.

The Newport News shipyard is the only private shipyard in the United States capable of a project as large as refurbishing the USS George Washington.

The ship is the sixth Nimitz-class aircraft carrier to undergo a major life-cycle overhaul. Before it traveled to Newport News for upgrades, the ship was stationed in Yokohama, Japan. 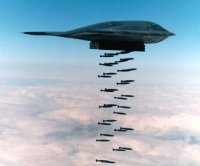 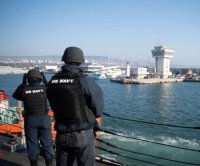 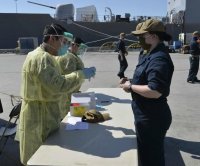