Officials at the base said they have been working with the New Mexico Environmental Department on the issue since last year when the contamination was confirmed.

By
Allen Cone and Stephen Feller

Violations of the discharge permit trigger corrective action requirements for the Air Force, according to a state environment agency news release this week.

Per- and polyfluoroalkyl substances, or PFAS, were found in groundwater on the base at levels nearly twice the U.S. Environmental Protection Agency's drinking water health advisory in monitoring wells covered by Holloman's groundwater discharge permit.

Maddy Hayden, public information officer for New Mexico's Environment Department, told UPI that a notice of violation is the first step toward urging an entity toward compliance before more serious actions are taken.

Officials at Holloman said they have been working with the Environment Department since August on the issue -- and are already working to fix it -- but that it does not pose a safety issue as groundwater beneath the base is not used for drinking or anything else.

"Some of those results were no surprise to us," Technical Sgt. Matthew Rosine told UPI, because fire training had been conducted in some areas contamination was found, and chemicals used in the training are known to be carcinogenic.

The suspected carcinogenic chemicals have been present in fire-suppressant foam previously used by the Air Force, which, according to New Mexico's Environment Department are known to be environmentally persistent, mobile in groundwater and bioaccumulate in the food web.

Exposure to PFAS can lead to cancer, thyroid disorders and low infant birth weights, according to the federal EPA.

Rosine said Holloman doesn't "use the groundwater under the base or in this area for anything," including drinking, so the threat to health should be minimal.

Because water under the mountain is considered to be up-gradient, it's not possible for it to be contaminated by chemicals found on lower land, he said.

New Mexico's Environment Secretary-designate James Kenney said his agency was "dismayed by the Air Force's lack of prompt response to the contamination found at Holloman."

This is the third time the Air Force has been asked to deal with contamination problems at a New Mexico base. Cannon Air Force Base was linked to contaminated wells in a state environment report in October and Kirtland Air Force Base contaminated groundwater by jet fuel leakage from underground pipes that dates to the 1950s.

Hayden said "the use of aqueous film-forming foam during training and other firefighting activities is believed to be the source of the contamination" at all three bases, though she noted that PFAS levels detected at Kirtland are far below the EPA's health advisory level.

"Time is of the essence," Gov. Michelle Lujan Grisham said in a separate statement. "I demand an action-oriented, productive environment where these longstanding issues are being substantively addressed by the Air Force. New Mexico stakeholders are asking me to weigh in directly because the Air Force has not been responsive to them. This is unacceptable."

"New Mexico is a proud and welcoming host to three Air Forces bases, and we are entitled to accountability and access to safe, healthy water for households and businesses in our communities. We will pursue this and push the Air Force until it is achieved," the governor and congressional members said in a statement.

Rosine said the legal and environmental teams at Hollowman, on receiving the letter from the Environmental Department, immediately "started working on a path ahead."

Defense News // 14 hours ago
VA still failing to make timely appointments for patients, report says
Sept. 29 (UPI) -- The report also found that few VA medical centers have the recommended number of staff for the community care program and the GAO recommends that VA leadership assess its community care staffing and resource needs and develop a plan to address any identified risks to their ability to schedule timely appointments. 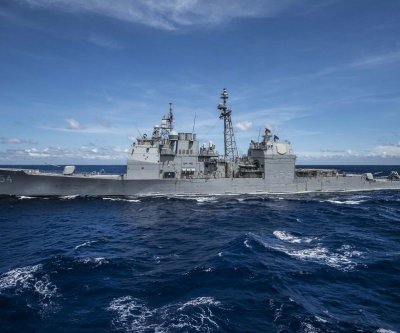