Raytheon and the U.S. Navy tested the Ship Self Defense System Integrated Combat System aboard the first of the new class of aircraft carriers, the USS Gerald R. Ford.

Feb. 5 (UPI) -- Raytheon and the U.S. Navy completed the first test of the Ship Self Defense System Integrated Combat System aboard the first of the new class of aircraft carriers, the USS Gerald R. Ford.

The newest generation of Raytheon's Ship Self Defense System successfully engaged in its first live-fire test of an unmanned aerial vehicle target off the coast of California aboard USS Gerald R. Ford.

The test -- against an unmanned aerial vehicle target off the coast of California -- was the first of several live fire events planned for the ship and it's new ICS this year, Raytheon said Tuesday in a press release.

"The design of our Ship Self Defense System enabled seamless integration of the sensors and missiles with the CVN 78 combat system during this first-of-its-kind test, proving the ability of the system to defend our sailors," Mike Fabel, Raytheon's SSDS program manager, said in a statement. "This integrated combat system success brings Ford one step closer to operational testing and deployment."

The Ford-class ships will contain Evolved Sea Sparrow Missiles and Rolling Airframe Missiles, according to the U.S. Navy.

The Ford was formally commissioned into the Navy on July 22, 2017, and is projected to be deployed around 2020, following further testing. The other class ships being built are the John F. Kennedy and the Enterprise. Also, the unnamed CVN 81 is planned.

The Ford class of ships are the first new design for an aircraft carrier since the Nimitz-class debuted in 1975.

The ship, built by Huntington Ingall Industries' Newport News Shipbuilding in Virginia, will have a crew of approximately 4,550 and carry 75 or more aircraft.

Defense News // 14 hours ago
U.S. not prepared to defend against AI-based attacks, report says
March 2 (UPI) -- The federal government is not prepared to address threats posed by the increased adoption of artificial intelligence, according to a new report from the The National Security Commission on Artificial Intelligence.

Defense News // 19 hours ago
Air Force shifts to operational camouflage, allows shorts on hot days
March 2 (UPI) -- Air Force members will be able to wear shorts while working in hot temperatures, the branch announced on Tuesday -- along with a series of other changes to its dress code and two uniform announcements. 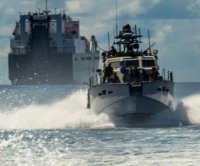