Nov. 8 (UPI) -- The remains of a U.S. Navy sailor killed in action during Japan's surprise attack on the U.S. naval base at Pearl Harbor was laid to rest in Guam on Thursday.

Steward Mate 1st Class Ignacio Camacho Farfan's recently identified remains were returned to the island of Guam where he was born and raised before he joined the Navy at age 19 in 1939. He was interred at the Guam Veterans Cemetery at Piti.

"Petty Officer Farfan, this veteran's cemetery will welcome you home today to your final resting place, carried on the arms of your Navy brothers and sisters, your coffin swathed in an American flag, escorted by the descendents of your family's bloodline, surrounded today by an entire community," Rear Adm. Shoshana Chatfield, commander of Joint Region Marianas, said in an address at the ceremony.

Farfan was stationed aboard the Nevada-class battleship USS Oklahoma docked at battleship row when the Japanese launched the attack on Pearl Harbor. He was one of 429 sailors killed when multiple torpedoes struck the Oklahoma, causing it to capsize and sink.

Farfan was buried with his shipmates in unknown graves at the National Memorial Cemetery of the Pacific in Honolulu.

"It is now time to celebrate and welcome him home, and to give thanks to him and to so many who've paid the ultimate sacrifice for the paradise we live in," Guam Governor Eddie Calvo said at the ceremony. "Eternal rest be granted onto Ignacio."

The Guam National Guard funeral detail delivered a 21-gun salute followed by a bugler playing Taps, while Farfan's descendants, including his niece, looked on.

Farfan's remains were identified earlier this year by the Defense POW/MIA Accounting Agency as part of a project to identify the service members who died during the Dec. 7 attack. After he was identified, the remains were escorted home for the burial by his family.

The Defense POW/MIA Accounting Agency is charged with locating, recovering and identifying remains of U.S. service members recovered from past war zones. They use forensics and extensive records research alongside DNA testing when viable samples from the remains and comparison DNA is available.

Defense News // 15 hours ago
New policy lets deployed and pregnant Army officers delay education if promoted
Nov. 24 (UPI) -- Some noncommissioned Army officers who have been selected for promotion will be able to advance to their new ranks before completing required pre-promotion courses, per a new policy which will go into effect in the new y

Defense News // 15 hours ago
BAE awarded $197.4M for work on USS Wasp
Nov. 24 (UPI) -- BAE Systems has received a $197.4 million contract from the U.S. Navy for work on the amphibious assault ship USS Wasp, the Pentagon and BAE announced.

Defense News // 19 hours ago
Russia claims it expelled USS McCain from Peter the Great Gulf
Nov. 24 (UPI) -- Russia's defense ministry said Tuesday that it caught the U.S. Navy destroyer USS John McCain in contested waters in the Sea of Japan and chased the vessel off. 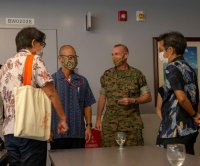