Jan. 16 (UPI) -- The U.S. Air Force has awarded $172 million to Northrop Grumman to manage the payload technology for a battlefield communications system.

This one-year contract, announced Friday by the Department of Defense, provides the Battlefield Airborne Communications Node with payload operation and support.

The BACN system allows ground troops to reach needed support over mountainous terrain with imagery, video, voice and data. The system can also act as a high-altitude relay, including airdrop and airstrike operations.

The system is designed to work with the RQ-4 Global Hawk unmanned aircraft system and the BD700 manned aircraft platform, flown by the Air Force as the E-11A. Last September, Grumman received $265 million for support of four BACN E-11A aircraft.

Work on the contract will be conducted in San Diego, Calif., and other overseas locations, with completion expected by Jan. 23, 2019.

A total of $56 million will be obligated from fiscal 2018 overseas contingency operation and maintenance funds at the time of the award. 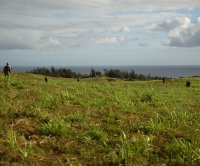 Defense News // 4 hours ago
Saudi, Qatari, Israeli planes join USAF B-52 in Persian Gulf show of force
March 8 (UPI) -- A U.S. Air Force B-52 bomber joined escort aircraft of Israel, Qatar and Saudi Arabia in a flight over the Persian Gulf, in a show of force aimed at Iran.