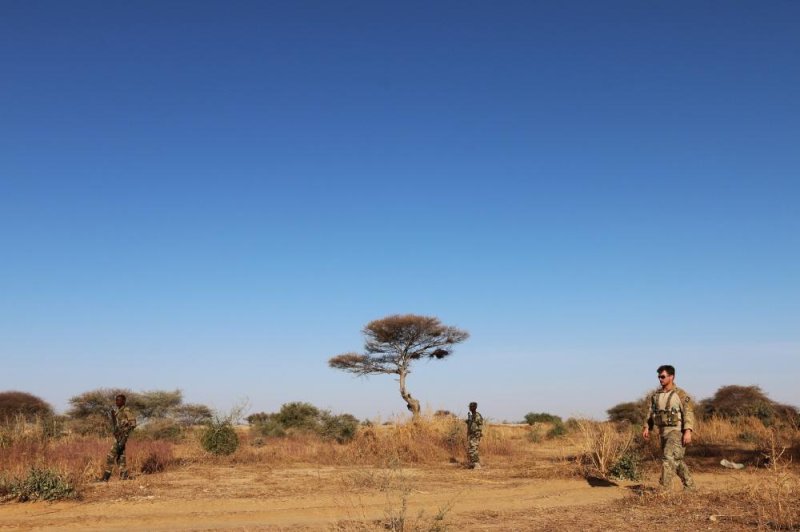 Oct. 26 (UPI) -- The attack in Niger on U.S. and Nigerien troops at the beginning of the month followed an aborted effort to track a target, according to U.S. intelligence officials.

Joint Staff Director Lt. Gen. Kenneth F. McKenzie Jr. told reporters at a press briefing Thursday that the attacked 12-man Special Forces team was not the only one on the ground in Niger during the October 4 attack.

U.S. intelligence officials told UPI a special mission unit was preparing to go after a high-value target in Niger, but the mission was canceled after the target crossed the border into Mali.

McKenzie confirmed that there were other American teams operating in the area, but gave no details as to their activities because of their possible connection to the Oct. 4 attack.

U.S. intelligence officials told UPI they believe that Abu Walid al Sahrawi, also known as Adnan al-Sahrawi, was behind the Oct. 4 attack near the village of Tongo Tongo in the southwestern region of Niger near the Mali border.

Sahrawi, a pseudonym that means, "Adnan of the Desert," is a jihadist and a former senior spokesman and self-proclaimed emir for al-Mourabitoun, an al-Qaeda linked terrorist organization that operates out of West Africa. Sahrawi took an oath of allegiance to the Islamic State in May 2015, according to the Counter Extremism Project, a not-for-profit, non-partisan, international policy organization that combats the growing threat from extremist ideologies.

The Islamic State in the Greater Sahara, or ISIS-GS, would form after Sahrawi split from al-Mourabitoun. The group is believed to operate near Mali, according to a October 2016 post in Arabic on the encrypted app service, Telegram. The post was distributed by ISIS's Amaq news agency.

"ISIS-GS is a small offshoot," Malcolm Nance, a retired Navy senior chief petty officer and career counterterrorism specialist in the U.S. intelligence community, told UPI. "That was an ISIS-style ambush, but they have a lot more than 45-50 fighters. I suspect they are peeling off AQIM [al-Qaeda in the Islamic Maghreb] branches and rolling them into ISIS-GS."

The Special Forces team from 2nd Battalion, 3rd Special Forces Group were attacked in Niger, while returning to their forward operating base, Joint Chiefs Chairman Gen. Joseph F. Dunford told reporters on Monday. The complex attack involved an array of small arms weapons and rocket-propelled grenades and a force of about 50 militants.

The Green Berets ambushed in Niger were delayed as they left a meeting with local leaders -- which may have been part of the plan to attack them, Army officials previously told UPI.

Officials suspect that some people in the Oct. 4 Tongo Tongo meeting may have been working with the Islamic State, and some residents from the town have already been arrested.

French Mirage jets arrived on the scene approximately one hour later in a "show of force" in an attempt to drive out the militants. By the time, French air support arrived, troops had been in contact with enemy forces for two hours.

"It's important to note when they didn't ask for support for that first hour, my judgment would be that that unit thought they could handle the situation without additional support," Dunford said. "We'll find out in the investigation exactly why it took an hour for them to call."

Pentagon chief spokeswoman Dana White told reporters Thursday that the media is wrong regarding the notion that Army Sgt. LaDavid Johnson was abandoned, echoing a statement last week by Defense Secretary James Mattis that the "U.S. military doesn't not leave troops behind."

It remains unclear when Johnson was separated from the other members of his unit, but a search was mounted after a DUSTWUN was declared, a military abbreviation for duty status, whereabouts unknown -- meaning, a service member cannot be located, but they have not been confirmed dead or captured by enemy forces.

McKenzie told reporters that a joint effort made up of U.S., French and Nigerien forces were involved in what's called a tactical recovery of aircraft and personnel mission and the joint task force did not leave the area until Johnson was located.

A team of investigators led by a one-star general has been sent to West Africa on a fact-finding mission, with Congressional committees launching their own inquiries into the circumstances of the attack in the last week as well.