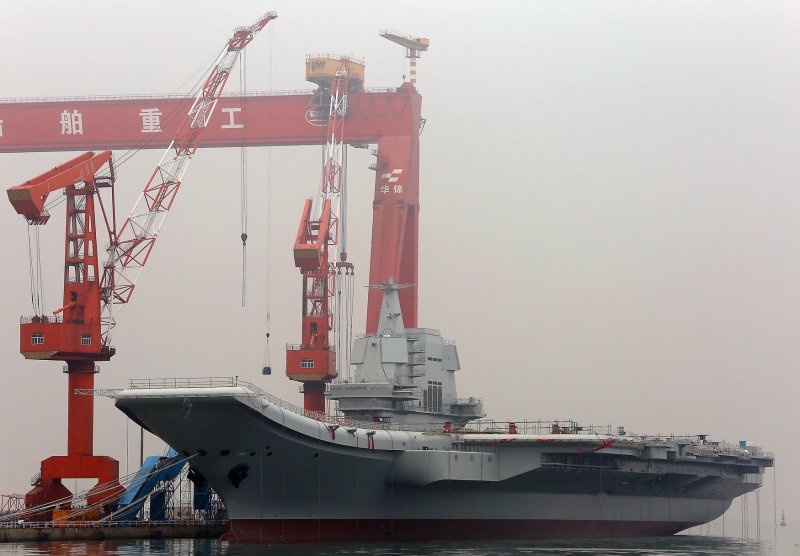 China's second aircraft carrier, currently called the 001A, is seen parked in a shipyard in the port city of Dalian in Liaoning Province, on May 4, 2017. The vessel, China's first self-built carrier, is among a wide range of research and development efforts the nation has taken on to bolster it's military capabilities in recent years. China revealed earlier this week it has started an agency similar to DARPA in the United States that will be tasked with advanced technological research. File photo by Stephen Shaver/UPI | License Photo

The Scientific Research Steering Committee was set up early this year and revealed for the first time in a documentary that aired recently on state broadcaster CCTV, the South China Morning Post reported .

The committee will fall directly under the Central Military Commission chaired by President Xi Jinping.

The newspaper reported two episodes of the 10-part series -- Carrying Reform Through to the End -- which was broadcast Sunday and Monday.

The broadcast suggests the new agency is similar to the U.S. Defense Advanced Research Projects Agency, also known as DARPA.

"As everyone knows, the internet, global positioning systems, stealth fighters, electromagnetic guns, laser weapons as well as other advanced technologies -- most are DARPA-related," a voice-over is the series says. "We should make greater efforts to promote scientific technology in our army if we want to win the competitive advantage."

China is one of several countries in Asia, including Japan and South Korea, launching a military research and development arm to counter the advancements of DARPA -- and with good reason, experts say.

"It is natural that China and other countries are trying to establish DARPA-like organizations that can marry cutting-edge science and technology for defense applications," Richard Weitz, director of the Center for Political-Military Analysis at the Hudson Institute, a think tank in Washington, D.C., told Science last March.