The U.S. Navy jets are grounded for at least another week as investigations continue into physiological episodes experienced by aircraft crew possibly linked to new oxygen systems in the planes. 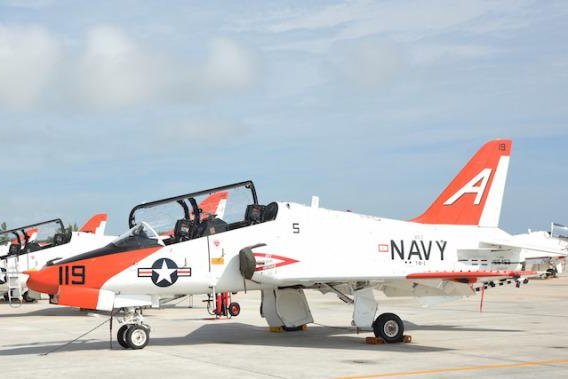 Forty T-45 Goshawk jets from Chief of Naval Air Training Command are pictured sitting on Naval Air Station Key West's Boca Chica Field in December. The T-45s were initially temporarily grounded last week after pilots complained about the oxygen system in the aircrafts cockpits, a grounding that has been extended for at least another week. U.S. Navy photo by Petty Officer 2nd Class Cody R. Babin/

The three-day grounding was initially called on Wednesday on the orders of Vice Adm. Mike Shoemaker, Commander, Naval Air Forces as instructor-pilot concerns led to the cancellation of about 40 percent of training flights from three Naval Air Stations on March 31.

"We have the right team of NAVAIR (Naval Air Systems Command) program managers, engineers and maintenance experts -- in conjunction with Type Commander Staffs, medical and physiological experts -- immersed in this effort working with the same sense of urgency to determine the root causes of PEs," Shoemaker said in a press release. "To tackle this as effectively as possible, we are using an 'unconstrained resources' approach to the problem, meaning we have not been nor will we be limited by money or manpower as we diligently work toward solutions."

The Navy said finding the cause or causes on the problem with the aircraft is difficult but multiple investigations are taking place, including the aircraft's oxygen system.

"As I have shared before in messages to the force, I am fully prepared to limit or curtail flight operations if our fleet leadership team determines the risk to our aircrew cannot be mitigated to an acceptable level," Shoemaker wrote in a post on the U.S. Navy's official blog, Navy Live.

"After frank discussions with the aircrew, leadership staffs and engineers, I will extend the operational pause for at least a week to allow time for our engineers to do a deeper dive into T-45 systems and for leadership to determine additional mitigation measures that will reduce the risks associated with the T-45 oxygen breathing system," he added.