The U.S. Air Force has demonstrated a key part of the country's nuclear triad, a B-52 bomber armed with nuclear-capable cruise missiles.

Jan. 20 (UPI) -- The nuclear capability of U.S. Air Force B-52 bombers was demonstrated recently with the launch of three unarmed AGM-86B cruise missiles.

The Air-Launched Cruise Missile, or ALCM, is designed to deliver a nuclear payload and is a key air component of the nation's nuclear triad.

In the recent test over the Utah Test and Training Range, a B-52H Stratofortress bomber dropped three ALCNs in three separate sorties, demonstrating the USAF bombing forces' ability to configure, load, fly and deliver the weapon.

"It [the ACLM] provides a clear, visible and tailorable deterrent effect, and denies geographic sanctuaries to potential adversaries," the Air Force said.

A B-52H can carry six ALCMs on each of its two externally-mounted pylons and eight internally on a rotary launcher.

The ALCM was initially designed with a 10-year life span but has been in use for about 35 years because of successful sustainment programs. A Long Range Stand Off weapon is being developed to replace it and will be fielded by 2030.

"The LRSO will be a critical element of the United States' nuclear deterrence strategy, but we must continue to support the ALCM program until it is fielded and these recent tests are clear indicators of the ALCM's effectiveness and reliability," said Maj. Gen. Scott Jansson, commander and Air Force program executive officer for Strategic Systems, which is part of the Air Force Global Strike Command's Nuclear Weapon System Evaluation Program.

Defense News // 23 hours ago
USS Roosevelt returns to San Diego after 6 months in Pacific
July 9 (UPI) -- The USS Theodore Roosevelt returned to its home port in San Diego Thursday after a six-month deployment that was lengthened as soldiers fought to contain a coronavirus outbreak on board. 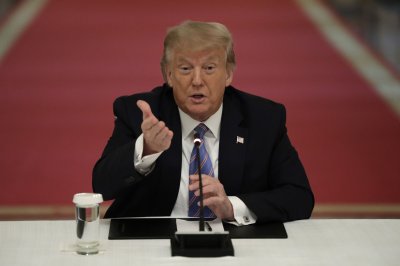