MINNEAPOLIS, April 7 (UPI) -- Additional canisters for the storage, transport and launch of missiles are to be produced by BAE Systems for the U.S. Navy.

More than 300 canisters for the MK 41 vertical launching system, or VLS, are to be supplied under a contract modification worth $38.2 million, BAE Systems said.

"We have a long history with the Mk 41 VLS that touches every aspect of the program, from designing and producing the canisters to installing and testing the launching systems," said Joe Sentfle, vice president and general manager of Weapon Systems at BAE Systems. "The canister contract is a testament to our sought-after expertise in supporting this world-class missile launching capability."

the MK 41 VLS, positioned beneath a ship's deck, is capable of launching a variety of missiles and acts as their launch rail to support flyout during missile firings. They also provide identification and firing support to missiles such as the Tomahawk, Standard Missile-3, Standard Missile-6, and Evolved SeaSparrow Missile.

The modification is to a five-year contact issued in 2013. Work under the modification will be conducted through 2018 ay facilities in Aberdeen, S.D.

Defense News // 8 hours ago
1,000 veterans died of COVID-19 in November, VA reports
Dec. 1 (UPI) -- The Department of Veterans Affairs recorded its highest monthly death count due to COVID-19 in November while case counts among the military continue an upward climb. 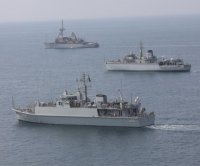