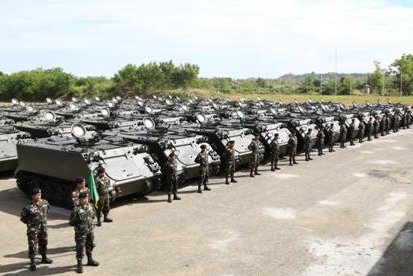 MANILA, Feb. 8 (UPI) -- The Philippine Army has formally received 114 armored personnel carriers donated to it by the United States.

The APCs are M113A2 vehicles, variants of which have seen service since 1960.

The tracked, amphibious vehicles weigh 13.6 tons, have an operational range of 300 miles and a land speed of 42 miles per hour.

They were delivered in two batches to the Philippine Army's Mechanized Infantry Division headquarters in December, and then repaired and refurbished.

A ceremony for their official receipt was held last week at a ceremony at Fort Bonifacio in the Manila area.

The Philippines, a former U.S. Commonwealth, is battling Muslim separatists in the south of the country as well as a communist insurgency elsewhere. It is also locked in a sovereignty dispute with China over islands in the South China Sea.