WASHINGTON, Jan. 29 (UPI) -- The U.S. Navy has given Boeing a $2.5 billion contract to manufacture and deliver 20 P-8A Poseidon aircraft.

The contract covers 16 aircraft for the U.S. Navy and four aircraft for Australia through the U.S. Foreign Military Sales program. Under the contract, Boeing will be tasked with providing obsolescence monitoring, change assessment, and integrated baseline and program management reviews.

Work on the contract will be performed in Seattle, Wash., and other locations including Maryland, New York and the United Kingdom, and is expected to be complete by December 2018.

The P-8A Poseidon aircraft is designed to replace the P-3C Orion as the U.S. Navy's long-range, anti-submarine and anti-surface warfare aircraft. The plane can also be used for intelligence, surveillance and reconnaissance missions.

The aircraft is crewed by nine personnel, reaches speeds up to 490 knots, and can be equipped with torpedoes, cruise missiles, bombs and mines.

Defense News // 17 hours ago
House repeals 2002 Iraq war authorization
June 17 (UPI) -- The House voted on Thursday to repeal the 2002 war authorization of military force against Iraq -- legislation that has been used to justify action on a range of groups since then. 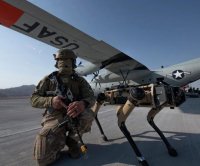