Among improvements to the vertical takeoff and landing fixed-wing plane – the company's answer to Bell Boeings V-22 Osprey – are a modified vertical fin, better designed engine exhaust nozzles and changes to the prop-rotor spinner cones, the Italian-British company said.

The improvements are designed to help reduce drag by about 10 percent, cut aircraft weight and improve efficiency.

"These aerodynamic improvements, new avionics, new cockpit display system and a large number of other improvements will together give the aircraft greater performance and mission capabilities, making it even more attractive for carrying out a wide range of missions which can benefit from its much higher cruise speed, high altitude cruise capability and longer range, when compared to existing helicopters or other proposed high-speed rotorcraft," said Clive Scott, AW609 Program manager.

Flight testing of the aircraft's modified vertical tail fin is being conducted on prototype 2 at the company's facility at Cascina Costa, Italy. Other enhancements are being tested in Texas on prototype 1 by AgustaWestland's U.S. subsidiary, AgustaWestland Tilt-Rotor Company.

AgusaWestland said an upgraded version of the Pratt & Whitney Canada PT6 engine is being used on the aircraft. Its integrated cockpit is being supplied by Rockwell Collins, while BAE Systems is providing an upgraded flight control computer. 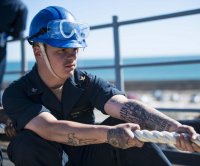