WASHINGTON, June 21 (UPI) -- U.S. audit comments that the F-35 Joint Strike Fighter may eventually be unaffordable are feeding into controversies in Canada, South Korea, Australia and Europe over the jet's future feasibility.

The F-35 purchase plan is by far the most controversial in Canada where Prime Minister Stephen Harper's conservative government is fighting battles with auditors and the opposition in and outside Parliament.

Those battles were not helped when federal auditor Michael J. Sullivan, acquisitions director of the Government Accountability Office, told a Senate subcommittee in Washington current projections call for a $316 billion outlay from development to purchase of the Lockheed Martin fighter jet through 2037.

Operation and maintenance costs for the U.S. inventory of the F-35 alone could top $1 trillion over a 35-year lifespan, Sullivan told the Senate defense appropriations subcommittee.

RELATED Stolen F-35 info could be a 'major problem'

"Congress may want to consider whether the funding assumptions are reasonable in our current fiscal environment," Sullivan said in a response to Subcommittee Chairman Dick Durbin, D-Ill.

That level of funding "will be difficult in a period of declining or flat defense budgets and competition with other 'big ticket items' such as the KC-45 tanker and a new bomber program."

The Pentagon estimates the F-35 JSF procurement, its most expensive single program to date, will cost $391 billion for 2,443 planes. USAF Chief of Staff Gen. Mark Welsh said in testimony the F-35 is "the only viable option" to replace aging F-16.

RELATED Israel gets ready for F-35s and KC-135s

Pentagon chief weapons tester J. Michael Gilmore says F-35 costs are rising also because of frequent fixes to problems reported during flight tests and warned the "most challenging portions" of the testing have not yet begun.

"We haven't actually tested any combat capability," Gilmore told senators, adding there may not be enough time or cash for full testing of crucial capabilities.

Further delays are likely due to the budget sequester, he said.

In Canada the U.S. cost concerns and news of theft F-35 information triggered more questions about the Canadian share of the program. Canada is expected to buy 65 F-35s for about $40-billion, but Harper is under pressure from the auditor general and the opposition to review the plan, downsize the order or find alternatives to the Joint Strike Fighter.

In Korea, the Korea Times renewed calls for a delay in the planned purchase of 60 F-35s.

Defense News // 1 day ago
Marines advancing anti-ship missile as part of force modernization plan
Sept. 14 (UPI) -- The Marine Corps is moving forward with developing a ship-killing missile that's central to a long-range restructuring of the military, the branch said Tuesday. 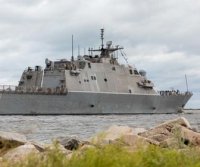