RIYADH, Saudi Arabia, Dec. 30 (UPI) -- The $30 billion sale of 84 advanced Boeing F-15SA fighters and upgrades for 70 older models is a major component of a far wider U.S. arms deal with Saudi Arabia that's worth $63 billion and aimed at countering Iran.

But even that mega-deal is dwarfed by what the Financial Times calls "one of the largest re-armament exercises in peacetime history" -- the sale of advanced weapons worth $122.88 billion to the Arab monarchies of the Persian Gulf, all to smother Iran's expansionist aims.

Washington's announcement of the F-15 deal Thursday was apparently timed to coincide with major Iranian naval maneuvers in the Persian Gulf.

These are widely seen as a warning by Tehran it will seek to close the strategic Strait of Hormuz, the only way in and out of the gulf and a key oil artery, if the West imposes new sanctions to throttle Iraq's oil exports.

The $63 billion, 10-year U.S. arms package for Saudi Arabia, which includes helicopters, missiles, precision-guided munitions and tanks, was unveiled in 2007 and is now kicking in.

The sales to the gulf monarchies, along with a projected arms deal with Iraq worth $11 billion, are intended to underline the Americans' commitment to protect the region's Arab oil states from Iran as it allegedly strives to develop nuclear weapons.

The U.S. withdrawal from Iraq, which was completed a couple of weeks ago, has alarmed the Saudis and their partners in the Gulf Cooperation Council.

The gulf monarchies' concern was heightened by the way the administration of U.S. President Barack Obama abandoned one of the Americans' staunchest Arab allies, President Hosni Mubarak of Egypt.

Mubarak was driven from office by unprecedented street protests in February in the early phase of the political upheavals that have convulsed the Arab world since January 2011.

Saudi Arabia is Iran's archrival in the gulf region. The kingdom, like the other GCC states, is dominated by Sunni Muslims, the main Muslim sect. Iran is controlled by the breakaway Shiite sect. The two have been locked in a religious feud since the seventh century.

Tensions between the two camps in the gulf have been rising steadily in recent years.

The Obama administration recently accused Iran's Revolutionary Guards of involvement in a plot to assassinate the Saudi ambassador in Washington, a charge Tehran denies.

Saudi Arabia has the largest military forces in the region. But like its GCC partners, has little or no combat experience.

These states, particularly the United Arab Emirates, are heavily reliant on foreign technicians to keep their complex weapons systems functioning -- and have even had to depend on Pakistani pilots to man their frontline squadrons in the past because of manpower problems.

The United Arab Emirates has in recent years built up a formidable air force with considerable striking power.

Military analysts in the gulf say the emirates, dominated by economic powerhouse Abu Dhabi, has signed contracts for military hardware totaling $35 billion-$40 billion, mostly with the United States and France.

The officials said the contract, involving 96 interceptors rather than the 144 originally envisioned when the project was first mooted in 2008, is likely to be formally announced next week.

THAAD will form the core of a regional missile defense shield the Obama administration plans to deploy across the region.

The GCC's defense chiefs agreed years ago to develop an integrated early warning system but dynastic rivalries have prevented progress.

The emirates is the first foreign buyer of THAAD. Saudi Arabia is reported to be interested in the system as well.

Kuwait has signed a contract for upgrading its Raytheon Patriot missile defense systems, which are designed to counter low-level threats, to PAC-3 standard.

All told, tiny Kuwait is expected to spend $7 billion on U.S. weapons systems over the next few years.

The sultanate of Oman, which shares control of the Strait of Hormuz with Iran, is slated to spend $12 billion on 18 Lockheed Martin F-16C/D jets and installing new command-and-control centers. 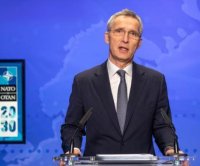 Defense News // 21 hours ago
U.S., Australia agree to partner on hypersonic missile development
Nov. 30 (UPI) -- The United States and Australia, in an agreement announced Monday by the U.S. Defense Department, will soon start speeding the development and testing of hypersonic weapons, officials of both governments said. 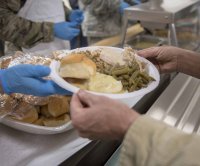