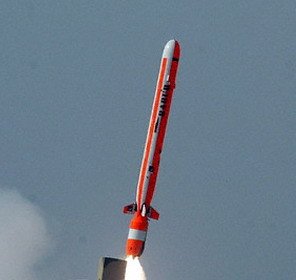 This is a free image. It was taken in 2005 by the Inter Services Public Relations (ISPR), the media wing of the Pakistan Armed forces. The image was released to public as proof/promotion of the missile test.

The test was witnessed by Joint Chiefs of Staff Committee Chairman Gen. Khalid Shamim Wynne, who said the launch would "go a long way in consolidating Pakistan's strategic deterrence capability and further strengthening national security." The country's "resolve and commitment to continue its strategic program will remain paramount."

The test at an undisclosed location was "warmly appreciated by the president and prime minister," who congratulated the scientists and engineers on their success, the statement said.

Its range is reported to be 470 miles, which, analysts have said, would allow for the missile to be launched deep inside Pakistani territory and reach major cities in neighboring India.

The range is politically significant because the missile was developed with an eye to defending Pakistan against India's indigenously developed BrahMos cruise missiles.

The 22-foot-long, tubular-fuselage Babur is believed to have up-to-date terrain contour matching as well as digital scene matching and area co-relation to maintain target direction and elevation. Both systems were developed with Chinese military assistance.

The missile resembles the BGM-109 Tomahawk, possibly because Pakistan research laboratories deconstructed as much as possible six 109s that crashed in Pakistani territory in 1998 during U.S. airstrikes against Afghanistan.

In particular, the engines of a 2005 test-launched Babur were similar to the Tomahawk. After a launch by a solid-fuel booster, a cruise turbo fan engine cuts in, giving the Babur a speed of about 550 mph.

The BrahMos is jointly developed by Russia's Mashinostroyenia and India's BrahMos Corp. and has a ramjet cruise engine based on Russia's supersonic anti-ship Yakhont missile. The BrahMos's maximum speed is 2,100 mph -- three times that of the Tomahawk.

Earlier this month, BrahMos Aerospace said it received $4 billion of orders from the Indian military. The missile, with a range of around 180 miles, will be delivered to the army and navy over the next five years, with orders beyond that up to 2015 worth around $10 billion, a company statement said.

The Indian navy already has some missiles but the order is the first for India's army.

Air and underwater variants are under development.