TEL AVIV, Israel, March 19 (UPI) -- Amid swelling tension across the Middle East, Israel is preparing for a new kind of conflict: cyberwarfare.

It has already engaged in some skirmishes, such as an unprecedented Arab attack on its Internet infrastructure during the winter war in the Hamas-ruled Gaza Strip in December 2008-January 2009.

Hamas sympathizers across the Arab world, as well as Iran, Turkey and the rest of the Muslim world, launched hundreds of cyberattacks on Israeli Web sites.

Israelis retaliated with a counteroffensive that culminated in the military breaching Hamas' al-Aqsa television network. That included an audio message in Arabic addressed to Gazans that said, "Hamas leaders are hiding and they left you on the front line."

The following day, Israelis hijacked the network's system again with a more elaborate message, an animated clip of Hamas leaders being gunned down with a warning that said "time is running out."

At its most effective, cyberwarfare is capable of shutting down a country's economy and its war-fighting capabilities by crippling its computer systems.

Much of the Israeli military's work in developing its cyberwarfare capabilities is shrouded in secrecy as it spars with foes who are also gearing up for this new and potentially crippling form of conflict.

But no less a figure than chief of Military Intelligence Maj. Gen. Amos Yadlin noted at a recent symposium in Tel Aviv that the Jewish state, technologically the most advanced in the Middle East, is becoming a world leader in cyberwarfare.

It was the first time Yadlin, or anyone in Military Intelligence, had discussed Israel's cyberwarfare program in public. It wasn't clear why Yadlin, who heads one of the most secretive branches of the Israeli military, should wish to address such a high security issue in a public forum.

But Israel, which masks its alleged nuclear arsenal in a miasma of deliberate ambiguity, is emphatic about maintaining the power of deterrence and Yadlin appeared to warn his country's foes that the Jewish state is prepared to take them on in this new arena.

Israel is replete with high-tech commercial firms run by veterans of elite computer units in the military. Yadlin said Israel, "recently crowned a 'start-up nation,'" had the brain power available to develop a powerful cybercapability.

In a policy address to the Institute for National Security Studies, a think tank at Tel Aviv University, Yadlin declared that cyberwarfare "fits well with the state of Israel's defense doctrine."

Two of the pillars of that doctrine are the pre-emptive strike and wherever possible ensuring that combat takes place in enemy territory rather than on Israeli soil. The overall doctrine has undergone several changes over the years as new weapons evolved and the geopolitical landscape shifted. But those policies remain.

"Cyberspace grants small countries and individuals a power that was heretofore the preserve of great states," Yadlin said.

"The potential exists here for applying force … capable of compromising the military controls and the economic functions of countries, without the limitations of range and location."

"Preserving the lead in this field is especially important, given the dizzying pace of change."

Yadlin's enthusiasm for this new form of warfare reflects his career as a combat pilot. He is a former deputy air force commander who flew one of eight F-16 strike jets in Operation Opera, the long-range airstrike that knocked out Saddam Hussein's French-built Osirak nuclear reactor on June 7, 1981.

Yadlin seemed to be inferring that Israel is aiming for the capability of digitally pulverizing an adversary, even though many of the country's regional adversaries are far less advanced technologically.

But Israel has long been the regional master of electronic warfare.

That was evidenced when Israeli airborne jammers blacked out Syria's air defenses to clear the way for seven F-15s that destroyed a mysterious complex near the Turkish border in a pre-dawn raid Sept. 6, 2007. The complex is generally believed to have been a nuclear plant being built with the help of North Korea.

Defense News // 5 hours ago
Three USAF bombers to perform flyover at Super Bowl
Jan. 25 (UPI) -- For the first time, three different bombers will form the flyover at the Super Bowl, scheduled for Feb. 7 at Raymond James Stadium in Tampa, the U.S. Air Force announced on Monday.

Defense News // 5 hours ago
Sikorsky, Boeing unveil plans for new 'Defiant X,' to replace Black Hawk
Jan. 25 (UPI) -- Details of the Defiant X helicopter, designed by Sikorsky and Boeing as a replacement for the UH-60 Black Hawk helicopter, were revealed by the companies on Monday. 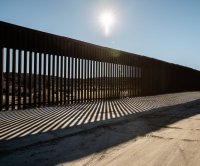