SANAA, Yemen, Oct. 28 (UPI) -- The government of Yemen has confirmed reports that its coast guard has seized a boat carrying weapons destined for Yemeni rebels.

Local Yemen officials say the boat was intercepted earlier this week, off the country's western coast, in the Red Sea. They said five members of the crew were being question in connection with charges of smuggling weapons to the Shiite, al-Houthi rebels.

A statement by the Interior Ministry said the Iranian vessel had been escorted to a naval base on a nearby island.

Iran's state television denied the story, countering also claims that the Yemeni government is using al-Qaida in its war against Shiite rebels.

Local news reports citing the findings of preliminary enquiries showed, however, that five of the Iranians captured Monday were "instructors" who had planned to deliver weapons and then evacuate wounded Iranians.

The interception comes a week after Yemen's President Ali Abdullah Saleh claimed that captured rebels had confessed to their funding from senior Iranian officials.

He fell short, however, of openly accusing the Iranian government of aiding and abetting rebel forces in the country.

The rebels and Iran deny any ties, but local media in Yemen said weapons ferried in the ship were destined for the al-Houthi fighters, followers of the late Malik al-Houthi, who claim their rights and needs have been neglected by the Sunni majority.

The rebels have been fighting for greater autonomy and public role for their interpretation of Shia Islam. They have openly challenged Saudi Arabia, clashing with Saudi forces recently along the two countries' frontiers.

Yemeni officials accuse the Houthis, composing the majority in the north of Yemen, of wanting to re-establish Shia clerical rule.

On Tuesday a court in Sanaa sentenced four Houthi rebels to death in the third trial of men captured during clashes with government troops north of the capital in 2008. Twelve others have been sentenced to death in earlier trials relating to the fighting.

The conflict -- first sparked in 2004 but enflamed last August with a fresh offensive by Yemen's government forces -- involves a lethal mix of poverty, extremism and sectarian division. Aid agencies claim as many as 150,000 people have since then been displaced as a result of the violence, many of them seeking refuge in remote hamlets on the country's borders with Saudi Arabia.

U.S. officials are worried that al-Qaida members, driven from Afghanistan, are attempting to set up an operational base in Yemen, the ancestral homeland of the network's founder, Osama bin Laden.

Defense News // 10 hours ago
U.S. Army finishes exercises in Turkey as part of Europe-focused drill
Sept. 21 (UPI) -- A multinational military exercise intended to improve interoperability between the U.S. Army and allied nations wrapped up its final phase in Turkey on Monday. 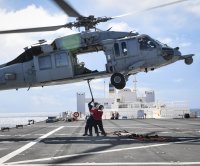