Boeing announced Monday an agreement has been signed for its acquisition of eXMeritus in a move to expand further into the cyber and intelligence markets. Details on the acquisition agreement were not disclosed.

eXMeritus is a developer of hardware and software technologies that support the secured sharing of information over classified and unclassified networks. Following a close on the purchase, eXMeritus will operate under Boeing's Integrated Defense Systems' Network and Space Systems unit.

"Our military and government customers have said that protecting vital information networks against cyber attacks is one of the nation's highest priorities, and Boeing is responding to the call," Jim Albaugh, Boeing Integrated Defense Systems president and chief executive officer, said in a statement.

"The addition of eXMeritus to our team is a strong enhancement to the Boeing capabilities developed through years of experience on secure networks for some of the most complex systems in national security today." 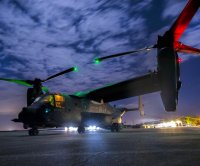