MORON AIR BASE, Spain, April 1 (UPI) -- The EADS CASA and BAE Systems defense-contractor development team announced a successful test firing of a missile from the Typhoon aircraft in Spain.

The test, which took place at Moron Air Base in southern Spain, was designed to measure the ability of a Typhoon firing an AMRAAM missile with radar systems in passive mode and target data for the missile "acquired by the radar of a second Eurofighter Typhoon," according to a news release.

Officials said the successful test, which marked the first trial of its kind, measured the Typhoon's capabilities against low observable aircraft threats. 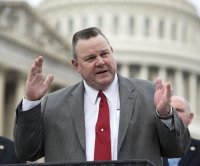