Lockheed Martin says its first weight-optimized conventional takeoff and landing variant of the F-35 aircraft, an exact copy of what is expected to be delivered to the U.S. Air Force, has been rolled out to undergo testing.

The F-35 CTOL variant, called the AF-1, is the result of Lockheed Martin's 2004 weight-savings program that redesigned the internal structure of the first F-35, or AA-1. Officials say the AF-1 will join the current testing program for Lockheed Martin's F-35 short takeoff/vertical landing variants.

"The Lightning II CTOL aircraft will be, by far, the most widely employed F-35 variant in the world, with more than 1,700 to be used by the U.S. Air Force alone," Dan Crowley, Lockheed Martin executive vice president and F-35 program general manager, said in a statement.

"The F-35A we delivered is, at its core, the same aircraft that will enter operational service with the Air Force and international customers."

Defense News // 9 hours ago
Malfunctioning B-2 bomber damaged during landing at Missouri base
Sept. 16 (UPI) -- A B-2 Spirit stealth bomber made an emergency landing at Whiteman Air Force Base in Missouri earlier this week after the high-tech aircraft malfunctioned during a training flight. 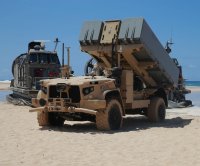