TEHRAN, Nov. 28 (UPI) -- The U.N.'s nuclear watchdog, the International Atomic Energy Agency, has put off taking Iran to the U.N. Security Council to give time for a new Russian diplomatic initiative to work.

The Russian offer, which aims to recognize Iran's right to nuclear technology, reportedly makes a key concession of allowing Iran to develop an early part of the fuel cycle -- including purifying and reconstituting mined uranium into solid form known as yellowcake and the conversion of the yellowcake into UF6, a gas that is the feedstock for enrichment.

By stipulating that the very sensitive step of the uranium enrichment -- feeding the gas through centrifuges -- shall be carried out on Russian territory at a plant to be built and jointly owned with Iran, the offer is meant to provide safeguards against the diversion of materials for any weapons program.

But there seems to be little space for compromise. On Sunday, Iran's Foreign Ministry said the country reserved the right to restart uranium enrichment work for "research and development" purposes, insisting the sensitive nuclear activity was not up for negotiation.

The comments on enrichment research came after diplomats at the IAEA in Vienna said they had seen a four-page intelligence document claiming Iran had discussed options for possibly resuming enrichment at the Natanz facility in central Iran, where there is already a cascade of 164 centrifuges.

But ministry spokesman Hamid Reza Asefi said the report was "baseless," nonetheless repeating that the suspension of enrichment work at Natanz was "voluntary."

Playing it down as "media speculation" and saying that "Russia has not offered any proposals yet," Asefi also said any talks would need to provide "concrete guarantees" that Iran could conduct fuel cycle work on its own soil -- a position at odds with the Russian compromise plan and the positions of the European Union and the United States.

"Debate on Russia's plan is a media speculation. Such a news fabrication is aimed at determining the outcome of talks by the media while it should be determined on the negotiation table," he told reporters during a weekly news conference on Sunday, but adding, at the same time, "it is crystal clear that any plan which embodies production of peaceful nuclear fuel inside Iran can be reviewed."

"The negotiations should not aim at wasting time and the approach towards Iran should not be discriminatory," he further said, according to state news agency IRNA.

Iran's ambassador to the IAEA, Mohammad Mehdi Akhundzadeh, also was quoted by the Iranian media as saying that "Like all member countries in the International Atomic Energy Agency, the Islamic Republic of Iran has the right to enrich uranium."

He repeated his country's refusal to give up enrichment on its territory, saying Tehran was "ready to study any proposals including the Russian proposal, but any such proposals must guarantee Iran's right to uranium enrichment."

Several members of Iran's conservative-held parliament have also rejected the Russian proposal, saying it is a "risky diversion" in Iran's nuclear dossier and a "means to prevent Iran from its right to a complete fuel cycle work."

The EU and United States suspect that the Islamic republic, despite its denials, is using an atomic energy drive as a cover for nuclear weapons development. Iran has already refused an EU offer of trade and other incentives in exchange for a permanent suspension of the development of a fuel enrichment cycle that has the potential for military use.

The IAEA's 35-nation board of governors was meeting in Vienna Thursday to review progress since Sept. 24, when it found Iran in non-compliance with the nuclear non-proliferation treaty, a finding that requires eventual referral to the Security Council for possible international sanctions.

Speaking for the EU presidency, Peter Jenkins, British ambassador to the IAEA, warned Iran against making any "unilateral moves" to increase its atomic activities and said Britain "reserves ... the right" to convene a special IAEA session ahead of the next scheduled meeting in March. He also said Iran needed to "seriously" consider the Russian proposal" and return to negotiations "on a reasonable basis and in good faith."

Jenkins warned that the opening for talks, and the IAEA's holding off on referral, should not be misunderstood by Iran.

"Iran should not conclude that this window of opportunity will remain open in all circumstances," he said, adding Iran's failing to fully cooperate with an IAEA investigation of its past and current nuclear activities "undermines its claim that its nuclear program is peaceful in nature."

But according to Akhundzadeh, "Iran has been cooperating with the agency beyond its commitments and we believe this is the utmost cooperation a country can have with the IAEA."

Meanwhile, a majority of deputies in the Iranian parliament last week gave their final approval to a law that would oblige the hard-line government to "stop voluntary and non-legally binding measures and implement its scientific, research and executive programs" in the nuclear field if the Iranian case were taken up in New York.

The move, although short of referring to specific reprisals, is subject to the approval by the legislative watchdog, the Guardian Council.

EU Foreign Policy Chief Javier Solana Wednesday called on Iran to make concessions on its nuclear program in order to allow talks with the EU to resume.

The EU would like "very much to resume dialogue" with Iran on its nuclear program, "but for that to happen, they also have to contribute," Solana told a press conference in Warsaw.

"They have to at least reduce the level of (uranium) conversion that they are doing now," Solana said.

"What (the EU) would like to do is continue offering the possibility to Iran to keep on with dialogue and keep on with the objective, which is very clear to us, that Iran has the right to have a peaceful program for nuclear energy, but we don't want that program to be taken in a military direction," Solana said. "That is something that we would object to, we would not accept. That is not only the position of the EU but the position of the majority of the international community."

The British government confirmed Monday the European Union had delivered a letter to Iran over the weekend offering to renew nuclear talks with Iran.

The British Foreign Office said that the offer was made "to discuss the basis for further negotiations."

"In this context, we support ideas such as the Russian proposal for a joint venture for uranium enrichment outside Iran," a Foreign Office spokesman was quoted by IRNA as saying. He was, however, unable to confirm reports that the resumption of talks could start as early as Dec.10, saying that there had been "no dates or locations" agreed for officials to meet. EU diplomats had already cited Dec. 6 as a possible date for a meeting between the two sides.

The offer was made in response to a letter sent earlier this month by the secretary of Iran's National Security Council, Ali Larijani, to Britain, France and Germany, which have been leading EU nuclear negotiations.

In his letter, Larijani had announced that "Iran welcomes rational and constructive negotiations in the framework of international rules and regulations."

The top negotiator had also stressed the need for the Islamic republic to "acquire its legal and legitimate right of the Iranian nation and guarantee the country's national interests."

Analysts say the West has now set enriching uranium -- as opposed to uranium conversion earlier -- as the new red line in the showdown with Iran over its nuclear ambitions.

If Iran moved ahead with enrichment, they add, it would not be enough, in terms of legality, to get non-aligned states and countries like Russia, which defend Iran's right to peaceful nuclear technology, to favor Security Council referral. It is not clear either how far China would be ready to take its sympathetic attitude to the call for Iran to stop enrichment, even with its delegate warning Iran "to co-operate", otherwise the issue "handled inappropriately, could get out of the framework of the IAEA and worse, the situation could get out of control." 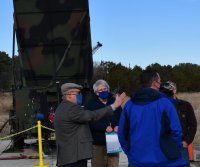