Plame was the covert CIA agent allegedly unmasked by the White House. Now she is preparing to file a civil lawsuit against the Bush administration officials who may have disclosed her identity and scuttled her career, Salon.com reported Thursday.

"There is no question that her privacy has been invaded. She was almost by definition the ultimate private person," said the couple's attorney, Christopher Wolf.

Wolf said the couple would make a final decision on filing a lawsuit after special prosecutor Patick Fitzgerald has completed his investigation, Salon said.

If they do sue, Wilson and Plame could be the first litigants to depose senior White House officials since Paula Jones, an employee of the state of Arkansas, sued President Bill Clinton.

Fitzgerald must decide whether or not to return indictments by Oct. 28, the day the grand jury investigating the leak of Plame's name to the press is scheduled to be dismissed. Democrats in Congress have requested a report from Fitzgerald on his findings but legal observers say he is under no obligation to provide one if he decides that no crimes were committed. 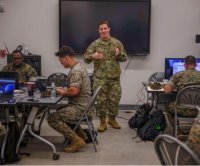 Defense News // 18 hours ago
U.S. Navy takes command of NATO's mine countermeasures group
June 23 (UPI) -- With a ceremony aboard the USS Mount Whitney, the U.S. Navy assumed command of Standing NATO Mine Countermeasures Group 1 for the first time. 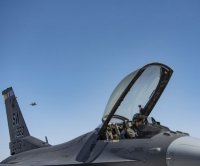