Some of Kerry's Vietnam comrades say he lied

WASHINGTON, Aug. 5 (UPI) -- Some former Vietnam comrades of Sen. John Kerry accused the Democratic Party's nominee for president Thursday of lying about his war record and exploits. They also claim he "fled the scene" of the incident for which he was awarded a Bronze Star and the Purple Heart, giving him a ticket home after four months of a 12-month tour of duty.

"I know for a fact that John Kerry is a liar, and now I have documentation that proves it," Larry Thurlow, like Kerry a Swift boat commander, told United Press International. "I think John is a bald-faced liar and one of the most opportunistic people I've ever known in my life."

The Kerry campaign issued a lengthy rebuttal of the allegations and made other Swift boats veterans available to support Kerry's account of his actions in Vietnam.

But other veterans have banded together to proclaim that Kerry is unfit to be elected the nation's commander in chief.

They call themselves Swift Boat Veterans for Truth and have founded a "527" advocacy group made up of more than 200 men, including Thurlow, who served with or after Kerry in Vietnam on river patrol boats in 1968 and 1969. Among them are Kerry's former commanding officers, fellow skippers and enlisted personnel, including a gunner on Kerry's first boat, from Coastal Division 11.

Swift Boat Veterans for Truth announced its opposition to Kerry in early May. The group began running a television ad in the election battleground states of Ohio, West Virginia and Wisconsin Thursday questioning Kerry's fitness to be U.S. commander in chief.

The ad is titled "Any Questions?" -- a take off from Sen. John Edwards, Kerry's running mate, saying at the Democratic National Convention that if people had any questions about Kerry's character, just ask the men who served with him in Vietnam.

"We're talking about judgment. We're talking about truthfulness, reliability, loyalty, and, above all, trust," retired Rear Adm. Roy Hoffmann, the man in charge of the riverboats during Kerry's tour of duty, said in an interview. "And in my experience with (Kerry), he didn't measure up to that."

The Kerry campaign, when asked to comment on the allegations Thursday, called them "patently false" in a 36-page rebuttal.

The campaign's document showed connections between people funding the group and President Bush and his adviser Karl Rove, as well as contradictory statements by some people offering testimony on behalf of the group.

"Far from being a grass-roots organization of veterans, this group is a front for the right-wing Texas Republicans to try and take away one of John Kerry's political strengths -- his service to the country in Vietnam," the Kerry campaign document said.

Hoffmann, Thurlow and other Swift boat veterans have compiled a thick stack of documents, including copies of official Navy papers, they say point to discrepancies in Kerry's official recounting of combat exploits, especially the incident of March 13, 1969, on the Bay Hap River in South Vietnam.

According to Kerry and accounts in official biographies, Kerry suffered shrapnel wounds to his left buttock and injuries to his arm when a mine exploded under another patrol boat while on a mission. Despite his wounds, Kerry rushed to save a Special Forces soldier who had fallen into the water from his own boat, ignoring heavy enemy fire and his injuries, including a bleeding arm, the official biographies say.

That soldier, Jim Rassmann, supports Kerry's presidential bid and appears with him at campaign events. He was a main speaker at the Democratic National Convention in Boston last week and part of Kerry's outreach to former service personnel for the November vote.

Swift Boat Veterans for Truth, however, in signed affidavits now in UPI's possession, say Kerry's shrapnel wounds were self-inflicted earlier in the day when he tossed a grenade into a sampan carrying rice and that there was no enemy fire at Kerry's boat or others involved in the incident. They point to mentions of the buttock wounds from the grenade and flying rice grains that appear in a number of stories by Kerry or about him in earlier articles and books, in contrast to his account for the casualty report.

They noted the self-inflicted rice injury was mentioned on page 105 of the book "John F. Kerry: The Complete Biography by the Boston Globe Reporters Who Know Him Best" and in the book "Tour of Duty." But according to the official casualty report, "Lt. J.G. Kerry suffered shrapnel wounds in his left buttock and contusions on his right forearm when a mine detonated close aboard PCF-94" (his boat). There was no mention of a wound that would draw blood on the arm.

Swift boat veterans who spoke to UPI also said that when the mine exploded some 50 yards from Kerry, he initially "fled" the scene, leaving other patrol boats to circle the stricken vessel and rescue men in the water, before returning four to five minutes later to join the rescue effort when it was clear they were not under fire.

"The truth is, the one who left everybody behind was John Kerry. Everyone else stayed," one of the Swift boat veterans said.

Rassmann, according to Thurlow, fell off Kerry's boat after Kerry accelerated when the mine went off under the other boat, which was on the other side of the river.

"There was absolutely no fire coming from any direction," Van Odell, a gunner aboard a boat behind the stricken vessel told UPI. "There were no tracers, there were no bullet holes in the boats, no one else was wounded. We came around (to rescue men) ... and at this point, of course, Kerry's boat was way down river.

"If there was any fire we should have had holes in our boat, we should have had other wounded. We didn't. Kerry fled the scene and then he comes back. We couldn't leave. The (damaged) boat was dead in the water. We stayed there to protect those people."

Jack Chenoweth, another skipper that day, said he took the wounded to a Coast Guard cutter. He said Kerry jumped aboard Chenoweth's boat, leaving his own vessel without an officer. Chenoweth said he saw no evidence of Kerry's wounds.

An after-action combat report that the vets say was written by Kerry mentioned his braving heavy enemy fire occurring along the river for a distance of some 5,000 yards -- about 2.8 miles -- at the time of his injuries and rescue effort.

The Kerry campaign made comments from other Swift boat veterans, including Rassmann, available.

Gene Thorson, a crewmate of Kerry's, said assertions that Kerry acted poorly in combat "are garbage."

"These people weren't there with John Kerry. If he hadn't made the right command decisions, in my opinion, we would be some of the names on that (Vietnam Veterans Memorial) wall."

Rassmann addressed allegations that the boats were not under attack in the incident, saying: "The fire was strong enough to knock out Tommy Belodeau's machine gun. ... I was in the middle of the firefight."

A third veteran, Del Sandusky, said: "It was a hellacious firefight. I don't know how these guys could stretch the truth like this."

"I'm not naïve enough to think people don't have different recollections after all these years even of the same incident, but virtually everyone else who was there that day -- and there were five boats involved -- basically have the exact same recollection I have," Thurlow told UPI in an earlier interview.

Thurlow said he even understands and doesn't mind people making up or embellishing their war tales around the bar at the veterans' hall but believes he had to come forward since Kerry was running for president and touting his military service in the process.

None of the Swift boat veterans said they know who recommended Kerry for a Bronze Star or the Purple Heart, which would not be granted for a self-inflicted injury. They said those records are missing. Swift Boat Veterans for Truth also complain that Kerry has not authorized the Navy to release all his service records to the media.

Under Navy rules then in existence, a man who received three Purple Hearts could request and would be granted relief from combat and return to the United States. Kerry, the veterans say, was gone shortly after the river incident.

Upon return to the United States, Kerry was briefly an aide to an admiral in Brooklyn before obtaining a discharge from the service. He then became a prominent anti-war activist, testifying before Congress about allegations that U.S. troops routinely committed atrocities.

Earlier this week several former prisoners of war in Vietnam, kept in the infamous prison known as the "Hanoi Hilton," berated Kerry for his anti-war activities, saying their North Vietnamese captors tried to use them to break their morale.

Other Vietnam veterans have come out against Kerry over his anti-war activities, but Swift Boat Veterans for Truth are the only ones specifically attacking his actions in Vietnam and his accounts of them.

"The Kerry campaign has utilized a revolving group of eight veterans from Coastal Division 11 (none of whom served with Kerry as much as two months)," they said in a written statement given to UPI. "In stark contrast to this small stable of supporters, the veterans on 'Any Questions?' have intimate knowledge of John Kerry."

Swift Boat Veterans for Truth has received the bulk of its donations from well-known Texas Republicans. The group reported $158,750 in donations from April 30 to June 30, 2004. Of that amount, $100,000 came from Texas developer and Republican activist Bob Perry. Another $50,000 came from two other individual contributors with Republican Party ties, John O'Neill and Harlan Crow, who gave $25,000 each.

(Thom Rose and Marie Horrigan contributed to this article.) 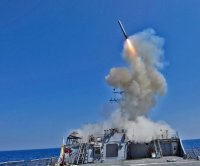 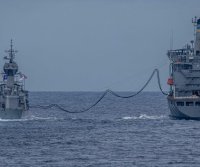