Commentary: Looking for the exit

WASHINGTON, April 29 (UPI) -- If it wasn't a quagmire, it was certainly quagmiry. And the first prominent retired general to break ranks with President Bush's Iraq war policy was a Republican who once headed the National Security Agency and also served as a deputy National Security Adviser. Gen. William E. Odom, a fluent Russian speaker who teaches at Georgetown and Yale, told the Wall Street Journal's John Harwood staying the course in Iraq is untenable.

It was hard to disagree with Odom's description of Mr. Bush's vision of reordering the Middle East by building a democracy in Iraq as a pipedream. His prescription: Remove U.S. forces "from that shattered country as rapidly as possible." Odom says bluntly, "we have failed," and "the issue is how high a price we're going to pay - less, by getting out sooner, or more, by getting out later."

At best, Iraq will emerge from the current geopolitical earthquake as "a highly illiberal democracy, inspired by Islamic culture, extremely hostile to the West and probably quite willing to fund terrorist organizations," Odom explained. If that wasn't enough to erode support for the war, Odom added, "The ability of Islamist militants to use Iraq as a beachhead for attacks against American interests elsewhere may increase."

Odom, who heads the pro-Republican Hudson Institute, also sees the sum total of what the U.S. occupation of Iraq has achieved is "the radicalization of Saudi Arabia and probably Egypt, too. And the longer we stay in Iraq, the more isolated America will become."

The retired four-star's proposed solution is for the United Nations and the European allies to take charge of political and security arrangements. This formal request from the United States, says Odom, should be accompanied by a unilateral declaration that U.S. forces are leaving even if no one else agrees to come in.

The Journal's John Hardwood in his Capital Journal column asks which sounds more credible - Gen. Odom's gloomy forecast or Mr. Bush's prediction of success? He does not tell us which way he's leaning. But a company-size bevy of retired U.S. generals and admirals were in constant touch this week with a volunteer drafter putting the final touches to a "tough condemnation" of the Bush administration's Middle Eastern policy.

The Council of Foreign Relations organized a conference call-in for its members with Gen. Odom. A score of former U.S. ambassadors who had served in the Middle East were also discussing how to join their voices to Britain's 52 former ambassadors, high commissioners and governors who wrote to Tony Blair to accuse him of scuttling peace efforts between Israel and Palestinians. The British diplomats also took Mr. Blair to task for policies "doomed to failure" in Iraq.

One of the British co-signers was Paul Bergne, who until recently was the prime minister's personal envoy to Afghanistan.

It was the first time in living memory that such a large group of former envoys to the Middle East had acted as a group to denounce the government's foreign policy, They said they spoke for many serving diplomats as well.

The retired American ambassadors were as one in warning President Bush that discarding the Road Map to peace in the Middle East and substituting a plan that leaves Palestinians with no hope for a viable state is tantamount to declaring war on moderation - and jeopardizing U.S. interests all over the Middle East.

When Mr. Bush suddenly dropped longstanding U.S. opposition to Jewish settlements on the West Bank, rooted as they were in U.N. resolutions, Israeli settlers could not believe their luck. Sharon conceded Gaza, where 7,500 Jewish settlers had no future among 1.3 million Palestinians, but in return obtained U.S. blessings for permanent Israeli habitation in large swaths of what was to be a Palestinian state. Even illegal hilltop settlements concluded they were now safe from removal and immediately began erecting permanent structures to replace mobile homes. A tiny, isolated community atop a hill near Nablus, where 14 families live in 20 homes on wheels, had already laid the foundations for permanent structures.

No sooner had the White House's red light flashed green than the once surreptitious, crawling annexation of the West Bank resumed in the open. Jewish West Bank settlers were jubilant, while Palestinians were adrift in the Slough of Despond. With the Right of Return for Palestinians also off the table, and no viable state of their own on the West Bank, extremist organizations will have no problem recruiting more jihadis (holy warriors) and merging terrorist operations with the underground resistance in Iraq,

Arab opinion has been inflamed to the point where Palestine and Iraq are now two fronts in the war against what Charles de Gaulle used to call "the Anglo-Saxons." Osama bin Laden is probably thinking he's some kind of strategic genius.

In Iraq, quite apart from Fallujah and Najaf, the U.S. occupation, according to the latest Gallup polls, has turned most of the population against America. In Baghdad, only 13 percent now believe the invasion and regime change it accomplished was morally justifiable. Only one-third of Iraqis believe the occupation is doing more good than harm, and a majority favor an immediate U.S. troop withdrawal while conceding this could put them in greater danger. Odom presumably has his finger on the same pulse.

Defense News // 22 hours ago
2 sailors assigned to USS Nimitz test positive for COVID-19
April 8 (UPI) -- The Navy is preparing to deploy the USS Nimitz this month despite the fact that at least two sailors on the aircraft carrier have tested positive for the novel coronavirus. 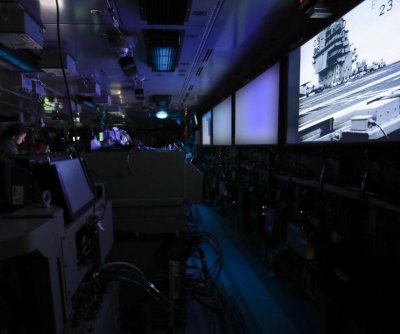