Veils to be banned in French schools

BORDEAUX, France, Dec. 11 (UPI) -- Muslim headscarves, Jewish skullcaps and large crosses are to be banned from French public schools, according to a report presented to President Jacques Chirac Thursday. More "discreet" religious symbols, such as small crosses, Muslim Hands of Fatima and Stars of David should be allowed, a 20-member committee headed by former education minister Bernard Stasi suggested after a three-month study of this issue.

Chirac will announce next week whether or not he supports putting these suggestions into law. He has previous taken a tough line on France's separation between church and state, which many French citizens -- and other Europeans --consider threatened by the increasingly frequent appearance of the "hadjib," or veil on the heads of Muslim teachers or adolescent female students.

However, in all of France, home to almost five million Muslims, no more than 1,250 veiled students currently attend secondary schools, interior minister Nicholas Sarkozy reported recently. Some have been expelled from school for refusing to take off their headscarves, especially in Alsace, where, ironically, the 1905 rule separating the spiritual and temporal powers does not apply because it was part of Germany at the time. In Alsace, the state still pays the salaries of priests, pastors and rabbis.

Nonetheless, Chirac insisted, "We cannot accept brazen signs of religious proselytism, regardless of the faith."

Perhaps as a concession to Muslims and Jews, the Stasi committee proposed making their highest feasts -- Eid and Yom Kippur, respectively -- annual holidays at public schools, just like Christmas. Muslim and Jewish students should also be served meals according to their religions' dietary requirements at public schools.

But especially for Jews the suggestions regarding "conspicuous" signs of their faith will pose a major problem, which might also become a constitutional issue. Before the committee issued its report, Joseph Sitruk, France's grand rabbi, explained that observant Jews must cover their head for prayers.

This leads to the troubling question: Does the religiously neutral state have the right to dictate when and where anybody should pray? Is it justified in standing in the way of a young Jew's plea to God before an exam, for example?

Will there be watchdogs in French schools preventing Jewish boys from placing their yarmulkes on their heads before asking God to be with them at this important moment, something their faith would not allow them to do bare-headed?

The Jewish community in France is 600,000 strong, though by no means all are of orthodox persuasion.

The debate about the headscarf in school has been wafting back and forth across Europe's now-invisible borders for a considerable time now. In September, Germany's Supreme Court declared unconstitutional a law by the southwestern state of Baden-Wuerttemberg prohibiting scarves on the heads of female teachers.

But then the court turned around and ruled that the nation's 16 federal states are entitled to create the legal basis for such a prohibition; in Germany, education is exclusively the province of the states or "laender."

Baden-Wuerttemberg's parliament immediately passed such a law, and other states announced they would follow its example, prompting protests from women politicians of all parties, plus representatives of trade unions, churches, feminist organizations, the arts and the media.

They argued, along politically correct lines, that such laws would be "exclusionary" and detrimental to "tolerance."

But in other parts of Europe, there are different concerns. If the veil is prohibited, so will be other religious symbols, many feared with some justification -- crosses in classrooms, for example, which are common especially in Catholic parts of the continent, from Bavaria on south.

Arguably, the father of a Muslim schoolboy in the Italian Abruzzi village of Ofena has done his 700,000 coreligionists in that country a grave disfavor when he sued to have all crucifixes taken off the local school's walls. He claimed this Christian symbol caused his child undue anguish.

A judge obliged the anguished immigrant, fanning fury throughout this nation 90 percent of whose citizens are Roman Catholics. Even Muslim organizations, dreading a backlash for the inter-religious dialogue, expressed somber reservations about this verdict, which Italian legal experts expect to be overturned in a higher court.

While Italy and Germany do not practice the separation between religion and state with full rigor, France is a different matter. In France, the concept of 'laicité,' meaning the state's absolute neutrality with respect to the plurality of religions, is deeply ingrained.

Hence the latest opinion poll showed that 57 percent of the nation's citizens favor a law like the one now proposed by the Stasi commission.

France also has an extensive private school system, run mainly by the Catholic Church, where such a law would presumably not apply. This means that if it is adopted, children from strictly Islamic families might flock even more Christian schools, where veiled Muslim girls are already a frequent sight.

Clearly fearing that Christian and Jewish symbols, though usually more discreet than the "hidjab," will also be threatened, the leaders of the Catholic, Protestant and Eastern Orthodox churches warned against such legislation in a joint statement prior to Thursday's announcement; they were joined by grand rabbi Sitruk.

"It cannot be the mission of 'laicité' to created spaces emptied of religion," the Christian leaders stated, "rather, laicité should offer a space where all -- believers and non-believers -- can debate about, among other things, what's tolerable and what is intolerable."

Not mincing any words, Rabbi Sitruk, warned: "Too many laws kill the Law." With evident exasperation he exclaimed: "What aberration to try to muzzle the religions under the pretext of laicité!"

Defense News // 4 minutes ago
Boeing nabs $68M for work on F-15s for Qatar
April 7 (UPI) -- Boeing has received a $68 million contract this week maintenance and logistics support for F-15 aircraft for the Qatar Emiri Air Force, as well as pre-delivery training, the Pentagon announced.

Defense News // 20 hours ago
Three Israeli generals released from coronavirus quarantine as one goes in
April 6 (UPI) -- An Israel Defense Force was general headed for self-quarantine on Monday as three other generals were released from hospital isolation, according to officials. 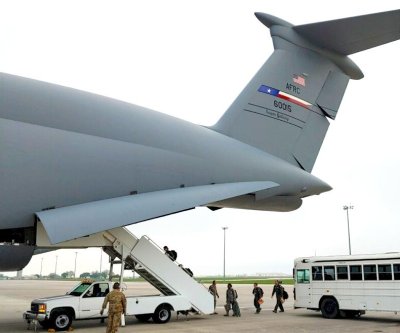 Defense News // 23 hours ago
Coronavirus diagnoses in military double in past week
April 6 (UPI) -- Coronavirus cases in the military more than doubled in the past week, to 1,435 cases, a Defense Department statement on Monday said.